Octavia Hill remembered at Southwark Cathedral a century after her death

Representatives of many of the organisations founded and influenced by social reformer Octavia Hill gathered at Southwark Cathedral on Monday to mark the centenary of her death. 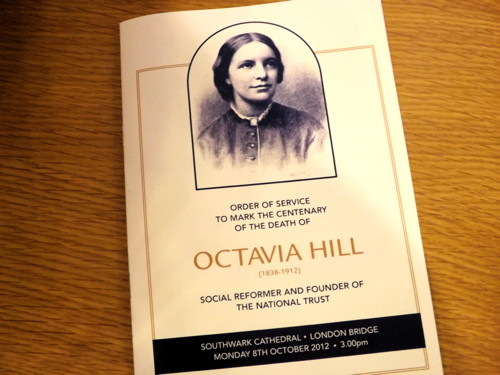 A memorial service for Octavia Hill, whose local accomplishments included the establishment of Red Cross Garden and its associated cottages and hall, was held in the cathedral in August 1912.

Hill, who was born in 1838, was influential in a wide range of spheres including social housing, open spaces, the cadet corps, the settlement movement and occupational therapy.

Sir Simon Jenkins, chairman of the National Trust, read an extract from the sermon preached at the 1912 service by Canon Hardwicke Rawnsley who, with Octavia Hill, had co-founded the trust.

"Octavia Hill's passions should be our passions, and the issues she addressed are still at the head of so much that needs addressing in our society," said the Dean of Southwark, the Very Revd Andrew Nunn.

The dean acknowledged the sense of betrayal felt in Southwark and Lambeth when the Church Commissioners sold the homes known as the Octavia Hill Estates.

"Legacy, by its very nature, is what is handed on," he said. "There remains in this part of the Diocese of Southwark both anger and sadness that her legacy of social housing was not treated as we believe it should have been.

"But the decisions of the past should not deflect us from continuing to work for that great heritage."

The sermon was preached by Canon Giles Fraser, priest-in-charge of St Mary Newington and Guardian columnist.

The service was attended by the Mayor of Southwark and the Mayor of Wisbech, Hill's home town. Southwark Council leader Cllr Peter John and Simon Hughes MP were both in the congregation.