Church Commissioners urged to repent for "putting profit over people"

The clergy of St John's Waterloo and St Peter's Walworth have held a service of repentance outside the offices of the Church Commissioners in the light of the sale of hundreds of homes in Southwark, Lambeth and beyond. 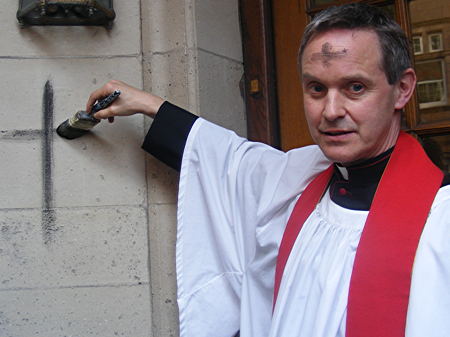 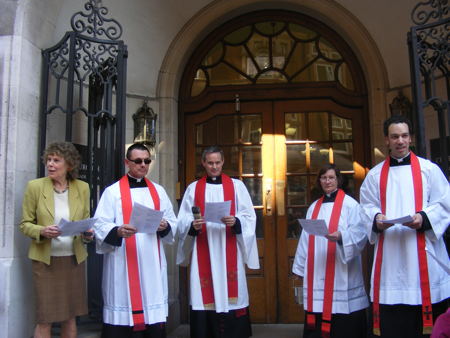 We reported last month that Grainger plc has bought outright the 1,630 London homes formerly owned by the Church Commissioners.

Five years ago the church had sold the homes – including 400 in Waterloo and Bankside – to a joint venture between Grainger plc and Genesis Housing Group, a registered social landlord.

The latest transaction means that the previously affordable homes for rent have now moved entirely into the private sector.

The original sale of the Octavia Hill estates went ahead despite a vigorous campaign by residents, local churches and politicians of all parties.

On Tuesday four priests from Lambeth and Southwark made a dramatic and symbolic gesture by holding a service of repentance outside the offices of those who arranged the original sell-off and marking an ash cross outside the front door of the church's main administrative centre.

The clergy were joined by Vauxhall MP Kate Hoey for the service on the doorstep of Church House in Westminster, as well as residents from the estates in Walworth, Vauxhall and Waterloo.

Canon Goddard said that the Commissioners had put "profit over people" in the sale which had led to "shame and injustice".

The congregation was invited to receive the ash of repentance – usually associated with Ash Wednesday at the beginning of Lent – as a gift of hope and forgiveness.

"We also invite the Church Commissioners to receive this symbol as a public acknowledgement of the wrong committed when the Octavia Hill estates were sold off, putting money before Christian values," said Canon Goddard.

The Southwark and Lambeth churches are calling for a review of the Church Commissioners to see how things could be done differently if a similar situation was to arise in future. Five years ago the Church Commissioners insisted that they were obliged by charity law to seek the best price for their assets rather than take into account pastoral and social considerations.

"It would be good if they could take seriously some of the things we are saying," said Canon Goddard.

"They could have done something more creative with the Charity Commission I am absolutely sure. It's a great shame that they didn't.

"It would be good if they took that on board in future sales."

On Tuesday the Church Commissioners told BBC London 94.9 that they had not foreseen the further sale of the estates, but they had received assurances from Grainger that they would continue a dialogue with existing residents.