A campaigning architectural society has published two counter-proposals to the demolition of much of Geoffrey Chaucer Technology College in Harper Road. 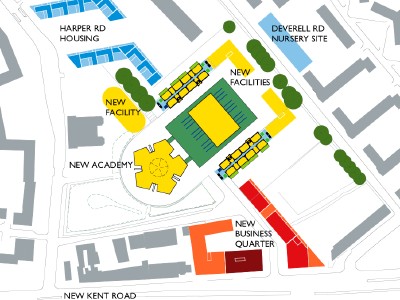 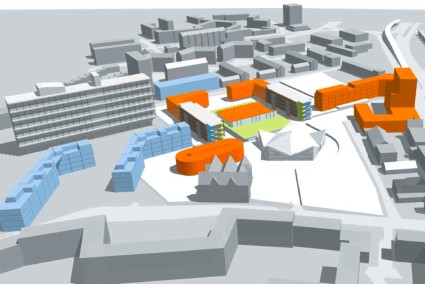 Geoffrey Chaucer Technology College and Joseph Lancaster Primary School in Harper Road are currently the subject of a plan to create a new all-age 3-19 city academy on the site.

The academy – sponsored by educational charity ARK (Absolute Return for Kids) – is due to housed in a new building designed by architects Future Systems.

The current Geoffrey Chaucer buildings date from 1958 and are Grade II listed. The school was designed by Chamberlin, Powell & Bon, whose other London buildings include the Barbican Centre and the Golden Lane Estate.

The Twentieth Century Society, which opposes plans to demolish much of the school, has now proposed two alternatives to what it describes as "the destructive and unnecessary loss ..." of "... an exemplary example of post-war educational architecture".

The society says that its proposals would retain all the existing buildings and contribute to the wider regeneration of the Elephant and Castle.

The centrepiece of the school is the distinctive Pentagon which the campaigners point out is only the second example of a hyperbolic paraboloid roof in England. The Future Systems scheme would retain the Pentagon but the campaigners say that it would be "out of context" without the rest of its contemporary buildings.

The Twentieth Century Society says that it sees either of its two alternative schemes – drawn up pro-bono by architect Robert Loader – as a viable solution in response to the needs of both the school and the community.

"If this listed example should be demolished, without a rigorous and creative examination of the possibilities, it would set a very worrying precedent," says a society spokesman.

"The society hopes these proposals can at least be the start of a sensible and informed debate about the future of these important listed structures."

We invited both Southwark Council and ARK to comment on to the Twentieth Century Society's proposals but no responses had been received by the time of publication.

Because the existing school buildings need to remain operational during the construction of the new academy the main new teaching blocks in the Future Systems scheme would be built on the existing playground close to Deverell Street.

This is the site of the former New Bunhill Fields Burial Ground and advertisements appeared in local newspapers last week under the Disused Burial Grounds (Amendment) Act 1981 announcing the removal and re-burial of the human remains currently under the tarmac.

"This scheme redevelops the under-used sites along the New Kent Road and re-appropriates the existing listed buildings for continued educational use as well as providing new facilities. This opens up what is at present an unsatisfactory divide between the site and the New Kent Road, allowing for community focus to shift towards the school from the road. Under these proposals, the Gymnasium and teaching blocks would both be reconfigured to improve form and function. The gym's maintenance issues would be addressed and the roof planted with dedicate access for use as an educational resource as a garden or outdoor study area. The facades of the two teaching blocks would be replaced, corridors extended and external lifts and stairways added to improve access. This would allow for extension of the classrooms and for a much-needed central corridor to ease congestion.

"Broadly, this scheme indicates how the listed buildings at GCS can form the basis for the new academy, fulfilling all modern educational requirements whilst also making a significant contribution to the wider and much-need regeneration of this area."

"This scheme uses the whole site and some surrounding plots currently owned by the school, to form a distinctive new quarter for small business. Retaining the New Kent Road proposals from Scheme One, Scheme Two constitutes a more complete transformation of the school buildings into small business units and workshops. Playing to the intrinsic strengths of the building, the Pentagon is to be retained as a community and performance space."