Southwark's planning committee this week gave the go-ahead for the demolition of listed buildings at Geoffrey Chaucer School and the construction of a new city academy. 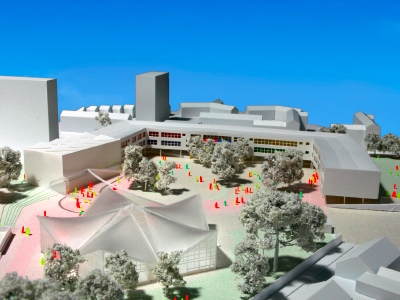 Model of the new Globe Academy designed by Future Systems

Sponsored by ARK (Absolute Return for Kids), the Globe Academy will bring together the existing Joseph Lancaster Primary School and Geoffrey Chaucer Technology College on Harper Road as a new 3-19 academy.

"We are delighted that all the planning applications were approved on Tuesday," says ARK Schools managing director Lucy Heller.

"ARK and the staff, pupils and parents at both Geoffrey Chaucer and Joseph Lancaster are delighted by this outcome which means that we can at last look forward to creating buildings that match both schools' aspirations for the future."

The other grade II listed school buildings on the current Geoffrey Chaucer site will be demolished, now regarded as unfit for purpose.

Earlier this year the Twentieth Century Society put forward counter-proposals which would have found new uses for the Geoffrey Chaucer buildings.

Because the existing school buildings need to remain operational during the construction of the new academy the main new teaching blocks in the Future Systems scheme will be built on the existing playground close to Deverell Street.

This is the site of the former New Bunhill Fields Burial Ground and public notices appeared in local newspapers in January under the Disused Burial Grounds (Amendment) Act 1981 announcing the removal and re-burial of the human remains currently under the tarmac.

VAT uncertainty could hamper community use

Southwark Liberal Democrats have warned that VAT rules could restrict the use of the new academy buildings by community groups: "Our plan is for school buildings to be fully available for community use out of school hours," says Cllr Caroline Pidgeon, executive member for education.

"But the rules state that if more than 10% of the building's use is not for education then VAT must be applied. Clearly that would add a massive chunk to the cost and could make many projects unaffordable.â€

"As things stand the new buildings will be built, but without community use."

Chancellor Gordon Brown, in his 2007 Budget speech, said: "...we will remove the VAT restriction and enable our academies to make their sports facilities available to their local communities".

But Caroline Pidgeon says that this promise has yet to be followed up with firm details: "Since the Budget we have heard no more details and so we cannot plan for community use. I have written to him urgently asking for the details that he promised two months ago."

ARK's Lucy Heller told us that she "firmly expects" the VAT situation to be resolved and the Globe Academy will become "a jewel in the community crown".