The Kagyu Samye Dzong Tibetan Buddhist group based in Carlisle Lane next to Archbishop's Park has opened its new complementary health centre in Walworth. 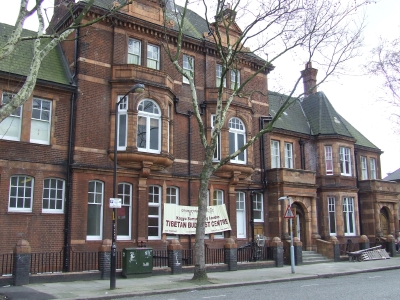 Kagyu Samye Dzong opened in the former Holy Trinity Centre next to Archbishop's Park nine years ago. With the building due to be demolished to make way for the controversial Founder's Place development – soon to be the subject of a planning inquiry – the community set about looking for a new home in the area.

Now they have turned the historic Manor Place Baths – situated just off Walworth Road – into a complementary health centre.

The building has been on English Heritage's Buildings At Risk Register for the last three years. Now Southwark Council has recommended that the building be taken off the register after the successful renovation by volunteers from the Kagyu Samye Dzong group.

Lama Yeshe Losal Rinpoche, abbot and director of Samye Ling Monastery and Tibetan Centre, opened the building on Saturday by presenting Simon Hughes MP and other dignitaries with white scarves – the traditional Tibetan symbol of peace.

The baths, walls, piers and railings were built in 1895 and the complex was originally used for public swimming, washing and laundry. It survived heavy bombing in the Second World War and was later used to stage boxing tournaments. The building began to fall into disuse by 1978 and by 1995 it was in a dangerously poor condition with no viable use.

"We are very pleased that this important Southwark building has been repaired and brought back into use by the Kagyu Samye Dzong Buddhist Community and can be used once again for community events," says Malcolm Woods of English Heritage.

"The building can now come off the Buildings at Risk Register because it has a secure future. We would like to congratulate the Buddhist community and hard-working volunteers who have made this possible – it truly is an exemplary way to bring a Building at Risk back to life."

For the time being the Tibetan Buddhist community will run both centres in parallel with Manor Place concentrating on complementary health and Carlisle Lane being a centre for teaching.