Southwark Cathedral's new dean, the Very Revd Andrew Nunn, used the sermon at his induction service on Saturday to affirm Southwark and South London's role at the heart of national life. 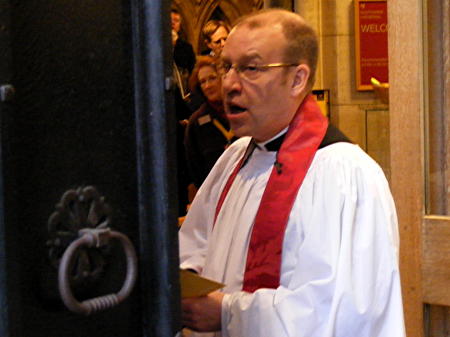 "This cathedral community is proud to be the mother church of the Anglican Diocese of Southwark for south London and East Surrey," he told a large Southwark Cathedral congregation on Saturday afternoon.

In comments prompted by recent press comment on the church's activities in south London, he said: "We are proud to be part of the melting pot of south London and stand proudly on the south bank looking across to the City of London and our sister cathedral St Paul's.

"A lot of what we offer London as a whole, but south London in particular and the global community of Christians who look to us, is something as vibrant and wonderful as the communities which make up our neighbourhoods.

"South London may in some people's eyes seem to be just one big suburb to serve London north of the river; a dormitory for people from which to cross the bridges to where the real action happens.

"But the truth is that increasingly this is where the real action happens and where real action has always happened. And we are proud that in this melting pot context what we stand for as a cathedral community, as a parish church for this immediate neighbourhood, is something that is particular."

Andrew Nunn, a Southwark canon since 1999, was preaching during his institution, induction and installation as rector of the Parish of St Saviour and All Hallows, Southwark and Dean of Southwark.

The dean began his sermon with words by John Keats who lived in St Thomas Street and ended by inviting the congregation to listen to words by William Blake who lived in Lambeth.

The Keats' poem quoted by the new dean was The Eve of St Agnes because the installation was taking place on St Agnes Day. Earlier this month he had made a pilgrimage to St Agnes's shrine in Rome where she lies among other early martyrs.

Canon Bruce Saunders, having received the mandate from the Bishop of Southwark, took dean designate Andrew Nunn by the hand and placed him in his stall.

The dean's oaths of loyalty to the Queen, Bishop and cathedral constitution were made using a copy of the Bible belonging to Lancelot Andrewes who lived in Southwark in James I's reign.

When tolling the bell to signify taking possession, the dean deliberately chose to pull the rope fifteen times which by tradition signifies the making of a long commitment.

A celebratory peal of bells rang across Borough Market as the service ended.

The procession into the cathedral, taking ten minutes to pass down the nave, included two former Bishops of Southwark, Roy Williamson and Tom Butler.

Kagyu Samye Dzong Tibetan Buddhist centre in Spa Road was represented along with other faith communities.

The dean will move into the Provost's Lodging, the deanery residence, later in the year. A plan to sell the historic house, where his predecessor Colin Slee lived, was recently shelved.

• At Sunday morning's Choral Eucharist Canon Bruce Saunders took up his new appointment as sub-dean of the cathedral.