Southwark Council has confirmed that it is to lease a new office building at 160 Tooley Street to accommodate more than 2,000 council staff. 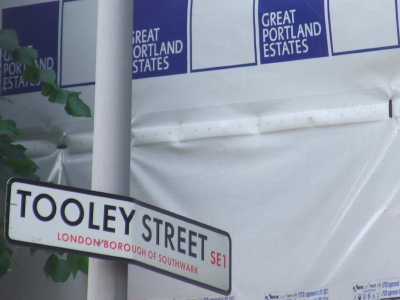 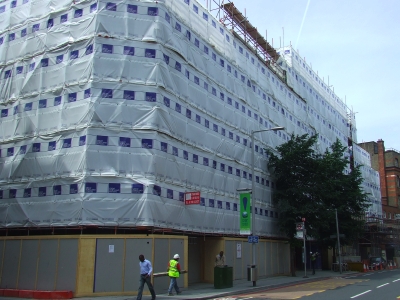 160 Tooley Street is opposite the Unicorn Theatre

As we revealed last month the council is to lease the office building which sits on a site bounded by Tooley Street, Shand Street, Barnham Street and the railway.

The building, which is currently under construction, was bought from developers Great Portland Estates by UBS Global Asset Management a year ago in a Ł94.3 million deal.

Southwark Council now plans to move up to 2,100 council staff – currently based in offices scattered around the borough – to the new building in early 2009.

"We have been looking for new accommodation that will allow us to bring key council staff together under one roof," says Cllr Toby Eckersley (Conservative), executive member for resources.

"This will help improve communication within the council and improve our ability to serve the people of Southwark.

"The move will provide staff with modern workplaces, reduce the time and cost of travelling between offices and help us to improve our recruitment and retention of staff.

"Not all council staff will move to Tooley Street. Many staff, including librarians, housing officers and other frontline staff will continue to work in civic buildings in the communities they serve."

Council meetings will continue to be held at Southwark Town Hall.

Council departments expected to move to Tooley Street include the regeneration department currently based on the Aylesbury Estate.

The plan to move so many council staff to London Bridge was criticised by opposition Labour councillors who accused the Lib Dem/Tory administration of selling off the family silver to pay rent on "shiny new offices".

The decision of the ruling executive was called in by the all-party Overview and Scrutiny Committee who demanded a report on the impact of the relocation on the areas where council staff are currently based.

BID director: "great testimony to how far this neighbourhood has come"

Linda Houston, director of the London Bridge BID Company, describes the news as "yet another great testimony to how far this neighbourhood has come in such a relatively short time".

"Not so long ago, London Bridge was somewhere you passed through, quickly, on your way to somewhere more glamorous. Now it is home to organisations such as Ernst & Young, the GLA, Norton Rose, Terra Firma and Visit London, with some of the UK's most prestigious modern office space and well over 30,000 employees."