A magnificent state of the art rehearsal room has been added to the Jerwood Space in Union Street. 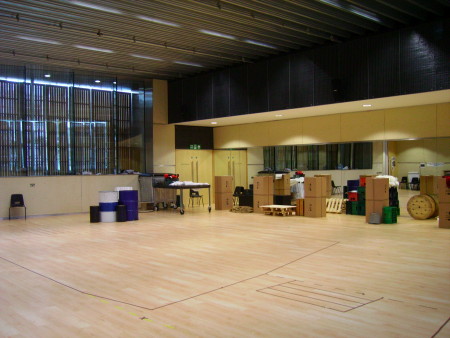 Inside the new rehearsal space

Architects Munkenbeck & Marshall have inserted a new floor on the south side without having to raise the building height by more than a mere five feet. The clever use of space and the minimilist design provides natural light for the rehearsal space which has a sprung floor and a mirrored wall. Iroko wooden shutters allow for sunlight to be contained.

"There are three surfaces," says director Richard Lee. "The corrugated roof, the high level grill and felt on the walls all help make the sound much more usable for a rehearsal room. You cut out the boom and it still remains quite live but there is not that reverberation you associate with a large hall."

Also installed is a large lift capable of carrying vital equipment such as a grand piano or scenery to the top floor. There are also several new meeting rooms on the north side of the building enjoying a panoramic view of Tate Modern chimney and City landmarks including the Gherkin.

The expansion follows the overwhelming success of the Jerwood's existing rehearsal spaces which are in constant use. Many West End productions begin at the Jerwood and this is often where the stars meet the rest of their cast for the first time. Meanwhile actors from small theatre companies can be rehearsing elsewhere in the building.

Work is expected to be completed later this summer but the Royal Festival Hall's Carmen Jones cast has already used the new rehearsal room, as well as the National Theatre and a dance company. Meanwhile businesses and organisations have started using rooms for meetings and conferences as they are completed.

"The Jerwood Foundation has financed the capital project and the Jerwood Space runs it on its behalf as a charitable exercise" says Director Richard Lee. "But we have to pay our way. There are no public grants."

The director speaks of his self sustaining economy with SE1 orgainisations such as the Bankside Residents' Forum continuing to use the facilities from time to time.

The Jerwood Space opened in 1998 and has been the venue for numerous exhibitions and events including Gordon and Sarah Brown's engagement party.