The National Portrait Gallery has launched an appeal to save the only known portrait from life of Bankside resident John Fletcher. 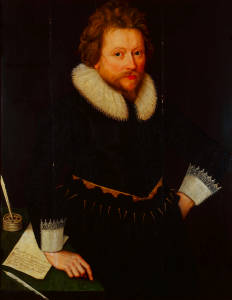 The playwright, who worked closely with fellow Southwark resident William Shakespeare, was born in 1579 and started collaborating with Shakespeare in about 1611.

One joint play was Henry VIII which is set across the river in Blackfriars and features Southwark's Paris Garden. They also worked together on The Two Noble Kinsmen and the lost play Cardenio which is based on Cervantes' Don Quixote.

Fletcher lived close to the Globe Theatre in Park Street sharing his home with fellow playwright Francis Beaumont. Indeed, according to John Aubrey, they also shared clothes and even a woman.

In August 1625 John Fletcher was buried near Shakespeare's brother Edmund in the church we now know as Southwark Cathedral.

The unknown artist shows Fletcher as a prosperous and well-dressed man with paper and pens. If the portrait is acquired it will be hung as part of a special display with Shakespeare and Ben Jonson who also knew Bankside well. The picture is on offer for Ł218,000 and, although some funding has already been found, the Gallery must raise Ł50,000 by Sunday 20 January.

The portrait is on show in the Tudor Gallery at the National Portrait Gallery.

Donations can be made online.