A long-exposure photograph featuring 180 pupils of St Saviour's and St Olave's School at Bricklayers Arms is on show at the National Portrait Gallery this summer. 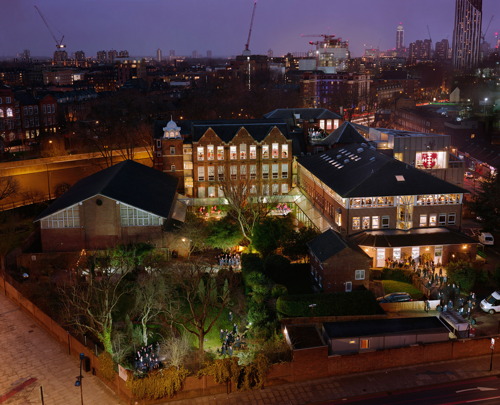 South of the River: Crowd Theory by Simon Terrill, 2016

GCSE Art students from St Saviour's and St Olave's School at Bricklayers and artist Simon Terrill have used the National Portrait Gallery's collection of portraits of famous south London sitters to develop a series of works, culminating in a panoramic elevated view of the school, which doubles up as a magically-lit group portrait of 180 students.

Divided into nine groups, the students responded through pose and gesture to the displayed portraits of people with 'south of the river' connections.

The ambitious photoshoot began at dusk and ended after dark on 7 March and involved more than 230 people.

A large format camera was set up on the roof of Peveril House across the road, construction site lights were installed, a smoke machine was activated and a DJ played tracks.

Every ten minutes on a sound cue the music stopped and the school fell silent while the students held their pose for each long-exposure shot.

Displayed for the first time, the commissioned portrait is the latest in artist Simon Terrill's Crowd Theory series, in which images are created that explore what happens when large groups of people gather in a place of personal significance.

Creative Connections: South of the River presents the students' work alongside gallery photographs of notable Southwark and Lambeth residents including activist and politician Peter Tatchell.

Simon Terrill is an Australian artist living in London who works with photography, sculpture, video and installation. He currently lectures in the history and theory of photography at London South Bank University.

• The images are on display in rooms 37 and 37a in the Lerner Contemporary Galleries on the ground floor of the National Portrait Gallery until 6 September. Admission free.