Shakespeare's Globe has unveiled an overhaul of its permanent exhibition about the history of the Bankside theatre and its modern reconstruction. 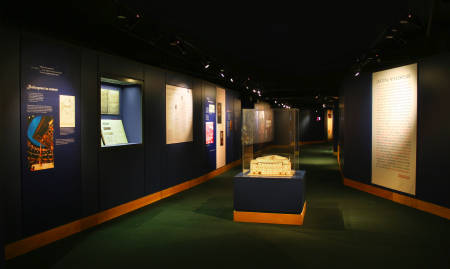 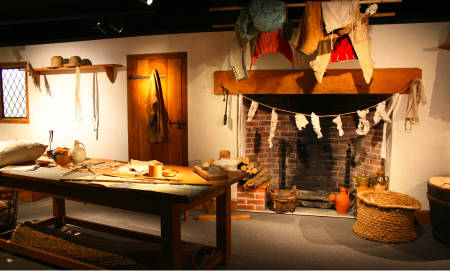 An Elizabethan tiring room is recreated in the exhibition; visitors are encouraged to touch the exhibits (Photo: Pete Le May)

A quarter of a million visitors a year visit the Globe to view the exhibition and take a tour of the modern replica of Shakespeare's playhouse. This summer the Globe hired consultants from Cultural Innovations to reconfigure the exhibition to provide a better experience for the visitor.

Visitors are greeted by a timeline that sets Shakespeare's writing in its local and international historical context.

There is a good section on Shakespeare's Bankside where visitors can learn something of the cluster of Elizabethan playhouses in the area.

The new-look exhibition gives greater prominence to the contemporary expertise in costumes and music that the modern Globe boasts; you are invited to feel the fabrics and try on the armour in the tiring room.

The final section brings the Globe's story up-to-date with the tale of the struggle – led by Sam Wanamaker – to develop an international centre for the study and performance of Shakespeare on Bankside.

• Admission to the Globe Exhibition & Tour normally costs Ł9 but you can visit for free during this week's Bankside Frost Fair (Fri-Sun).

Shakespeare's Globe recently announced its 2008 theatre season which opens on Shakespeare's Birthday – 23 April. The season – comprising nine productions – will be called Totus Mundus which is thought to have been the motto of the first Globe.

The season includes two new commissions. The Frontline by Che Walker is set on a Saturday night outside Camden Town tube and presents a modern, vigorous tale of London life on the edge.

Liberty, by the poet Glyn Maxwell, is an adaptation of Anatole France's 1912 novel Les Dieux ont Soif. and will be presented as a co-production with Lifeblood Theatre Company and directed by Guy Retallack.

A Shakespeare Party from Footsbarn Theatre is a production specially conceived for the unique space of Shakespeare's Globe.

In addition to its six main stage productions, the Globe is expanding its regional touring in 2008. This year's tour of Romeo and Juliet has been extended to even more UK venues and into Europe. A touring production of The Winter's Tale, directed by John Dove, is also part of the season.