The Provost's Lodging, the Dean of Southwark's official residence on Bankside, has been put up for sale. 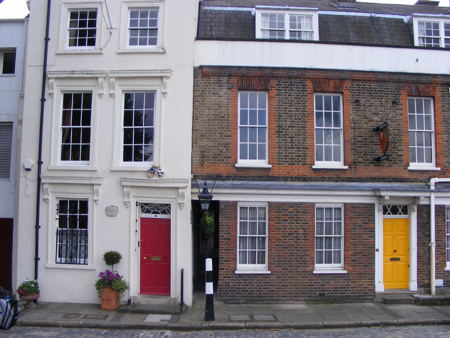 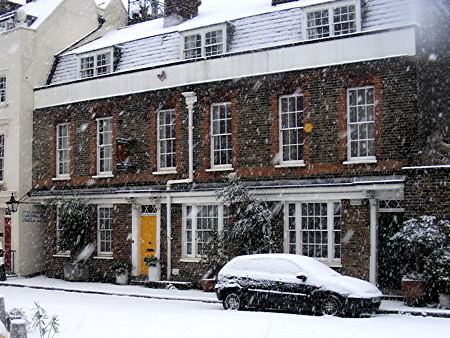 51 and 52 Bankside in the snow earlier this year

The five-bedroom house, dating back to at least 1712, is being marketed by Savills for £6 million.

Number 51 Bankside, a riverside landmark between Tate Modern and Shakespeare's Globe, was last occupied by the Very Revd Colin Slee who died in November. His widow Edith moved out at the end of March.

The grade II listed building is called the Provost's Lodging because Southwark Cathedral's chapter was for many years headed by a provost rather than a dean.

The cathedral hopes to raise a total of £7.5 million by also selling the adjacent 52 Bankside, currently occupied by the cathedral's director of music.

Both houses share a garden. The back of the terrace has a view over the Tate Modern Community Garden.

Southwark Cathedral is breaking a long association with Bankside by selling the houses. The Cathedral was a monastic church known as Southwark Priory until it was closed by Henry VIII. After the religious unheavals local people eventually managed to buy the priory church which became the parish church called St Saviour's. It was given cathedral status only in 1905.

One of those involved in buying the church for parish use was Philip Henslowe who built the Rose Theatre and staged premieres of Shakespeare plays. Henslowe is buried in the cathedral.

Henslowe's house, two doors to the east of today's Provost's Lodging, became the clergy house for at least three of the St Saviour's staff who, as successors to the Prior and canons, were known as chaplains and curates. There was often more than one chaplain.

From 1817 to 1830 Henslowe's house was home to the senior chaplain William Mann who had a large family and friendships with local boatbuilding families. The site of the house is now occupied by the entrance to the Globe exhibition.

In 1957 the war-damaged numbers 50 and 51 Bankside were purchased from the power station and knocked together to create the Provost's Lodging. The first to live there was the newly appointed George Reindorp who later became Bishop of Salisbury. This return to having the provost resident in the parish was considered a great advance since his predecessor had lived in Tulse Hill.

At this time Bankside was not a fashionable address. There was a low hum eminating from the nearby power station and number 49 next door had rats in the cellar. Sir Peregrine Worsthorne recalls catching a disease from the rodents whilst living there.

Harold Frankham, who was provost in 1972, had squatters as neighbours.

But by the 1980s the location was so tranquil that provost David Edwards would leave his weekly column for the Church Times in a milk bottle on the doorstep to be picked up overnight.

Colin Slee arrived in Southwark as provost in 1994 and became known as dean in 2000. He was said to be the only dean to have a view from his home of the 'wrong' cathedral.

The magnificent view of St Paul's and the City of London across the river is expected to attract interest. However, it is understood that a buyer could be constrained by the building's listed status. There are also unresolved problems concerning rights of way.

An advertisement for the post of Dean of Southwark was published in this week's Church Times and candidates will be interviewed in September.

The briefing pack for prospective applicants says that "a house is available and the successful candidate will be provided with more details and given the opportunity to visit".