Kevin Spacey, artistic director of The Old Vic, has cut a ribbon to mark the completion of the £3 million project to improve the pedestrian enivronment in The Cut. 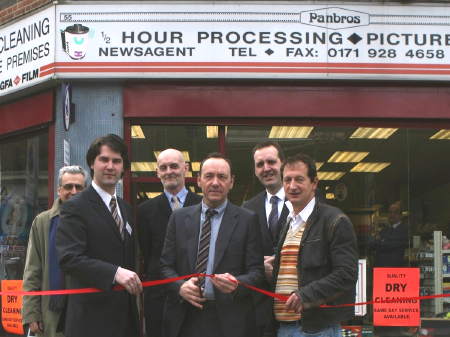 Kevin Spacey cuts a ribbon outside Panbros with David Lan of the Young Vic and Cllr Paul Noblet, Southwark's executive member for regeneration

Before and after: new surfaces and wider pavements

"This kind of work is becoming exceedingly important because it brings together pedestrians and businesses in an accessible and safe space," says Kevin Spacey, speaking at a launch event held at the Young Vic.

Improvements include the planting of 48 new trees, the widening of the pavements and the installation of new lighting. The street now also boasts 38 new cycle racks.

The original plan to have a line of trees down the centre of the street had to be amended when it was discovered that a water main runs down the middle of the road and the cost of moving it was prohibitive.

A new waste management scheme has also been introduced, although plans for unsightly commercial waste bins to be hidden underground were also abandoned and there are ongoing disputes with local residents' associations about the placement of paladin bins in side-streets off The Cut.

"The upgrading of The Cut has been designed to improve this important link between Waterloo and Bankside for the benefit of those who live or work locally, and also for visitors to the area," explains Savas Sivetidis, director of the Cross River Partnership.

"By reducing traffic dominance along the route, more pedestrians and cyclists will be attracted to this vibrant and important area in central London."

The project was funded under Transport for London's streets for People programme (more than Ł2 million), along with additional funding from the European Union (more than Ł500,000).

The scheme also required co-operation between Lambeth and Southwark Councils as The Cut straddles the borough boundary.

Kevin Spacey has revealed that The Old Vic could be closed for refurbishment whilst London is hosting the Olympic Games in 2012.

Speaking alongside Ken Livingstone at a City Hall press conference to launch new funding for cultural projects in London, Spacey told reporters that The Old Vic's participation in cultural events tied to the Olympics "will in large measure depend on whether I've managed to raise the money to renovate the building because we may have our 'walkabout' during the Olympics if we're lucky enough to have raised the money that we need to bring that building up to 21st century standards".

Spacey has often spoken about the poor state of the building and its leaking roof which has not been properly repaired since it was damaged in World War II.