Former Waterloo resident Tracey Emin has donated a neon artwork to be raffled in aid of The Old Vic theatre. 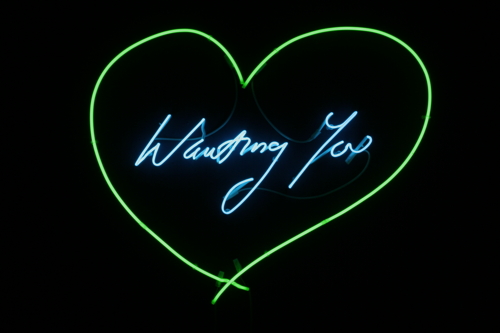 An Old Vic supporter, Emin has donated her Wanting You green and turquoise neon to be raffled in aid of the theatre's bid to secure its financial future. The piece will be sold via an e-raffle at www.christies.com/oldvicraffle with tickets priced at £10.

Works in the auction and raffle will be on public display at 35 Brewer Street from 25 June to 3 July.

In June 2012 Arts Council England awarded The Old Vic a £5 million grant conditional on it raising £15 million by the end of 2015. The money raised from the online auction and £10 e-raffle will be put towards this effort.

"I'm a massive fan of The Old Vic and have supported them for years but this time it's different," said Tracey Emin.

"By donating Wanting You to be raffled it gives lots more people the opportunity of supporting The Old Vic and also owning my work – I hope that thousands of tickets are sold."

Emin used to live just a stone's throw from The Old Vic and between 1995 and 1998 had her 'Tracey Emin Museum' in a shop in Waterloo Road.