Waterloo murder: council admits door had been broken for 7 months

The door entry system at Matheson Lang Gardens - where 15-year-old Arsema Dawit was killed - had been broken for 7 months, a council boss has confirmed. 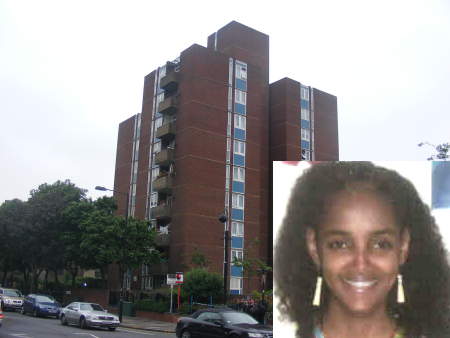 Matheson Lang Gardens in Baylis Road is a Lambeth Council-owned block. Teenager Arsema Dawit was found in one of the building's lifts suffering from fatal stab wounds on Monday afternoon.

"I can confirm that the door entry scheme was broken for some seven months," Lambeth Council chief executive Derrick Anderson told a heated meeting of the borough's Community-Police Consultative Group at St John's Waterloo on Tuesday evening.

"It was actually repaired and ready to go as of last Friday and keyfobs were being issued ... for the thing to be initiated tomorrow [Wednesday]."

"All of those repairs have to be aligned with the resources we have available and as you know it is not a possibility with the state of the finances in Lambeth to do things as quickly as we would like.

"We acknowledge ... that all too often these things remain unrepaired and I'll have to see in which way we can accelerate some of these things, particularly with security issues."

The allegation was investigated by officers from Southwark Police CID.

"As part of this investigation, on 12 May a Safer Schools officer spoke to the victim at her school however the victim was unaware of the incident and had no knowledge of it," said a police spokesman.

"Despite this we continued to investigate the circumstances of the incident and Arsema's mother was subsequently contacted on 19 May. The investigation was still being progressed when Arsema was tragically murdered."

The Metropolitan Police have since announced that they have commissioned an internal review of the investigation into the crime allegation made by Arsema Dawit and her family. They have also voluntarily referred this matter to the Independent Police Complaints Commission for their oversight should they consider it appropriate.