P&O's "three sisters" development next to Waterloo Station was approved by Lambeth councillors on Wednesday night, but the Allies & Morrison-designed scheme faces a rough ride. 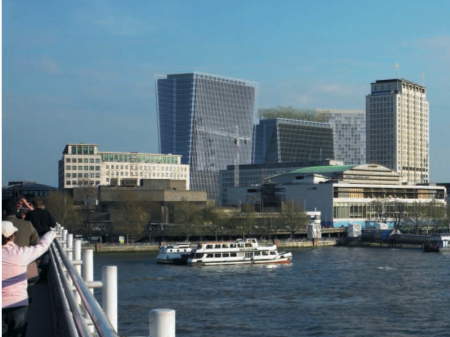 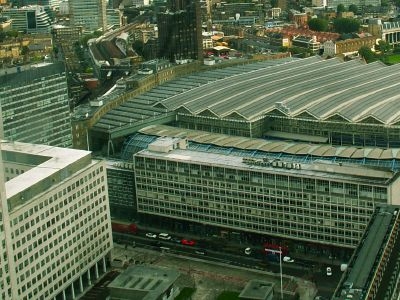 The current building seen from the London Eye

The final decision is likely to be out of Lambeth's hands. Communities secretary Hazel Blears has already directed Lambeth not to grant planning permission until she decides whether the scheme should be subject to a public inquiry.

And new Mayor of London Boris Johnson has also made known his displeasure with the scheme, despite a recommendation for approval from Greater London Authority officers.

The Mayor has concluded that "the proposal is unacceptable in strategic planning terms due to the impact of the proposal on the setting of the Westminster World Heritage Site, the view from the footbridge in St James's Park, the setting of County Hall and the Royal Festival Hall from various viewpoints".

The scheme has been vigourously opposed by English Heritage and the City of Westminster who are both likely to be key players at any public inquiry.

"They are far from world-class in my view," said Cllr Brian Palmer of the three proposed towers.

"They merely replace an unfortunate building reminiscent of Crawley new town in the Sixties with something more suited to Croydon in the Eighties."

He went on to describe the buildings, seen in combination with the Shell Centre on the other side of York Road, as "darkly oppressive".

"At ground level I fear that pedestrians will feel like ants stranded at the bottom of the Grand
Canyon," he said.

The meeting also heard from Bishop's ward councillor Gavin Dodsworth, who said that he agreed with the assessment of the Government's design watchdog CABE (Commission for Architecture and the Built Enivronment) who pronounced themselves "unconvinced" by the bulk and massing of the buildings.

"This will look like a wall," warned Cllr Dodsworth.

"We're sanguine about this development," said Michael Ball, director of the Waterloo Community Development Group, who explained that his group's concerns centred on the low level of affordable housing and inadequate section 106 contributions.

Although three economic assessments have shown that, given exceptional costs of constructing the building around the tube lines that run beneath site, the developers can't afford to provide any affordable housing and expect a normal profit margin, P&O are proposing that 21 per cent of the habitable rooms in their residential tower at the corner of York Road and Leake Street should be 'affordable'.

As Lambeth and London policy sets 50 per cent as its overall target, members were reluctant to support a scheme with such a low level of affordable housing.

"As a ward councillor of two years, it's blatantly obvious that we don't have enough homes," said Cllr Gavin Dodsworth.

"Unless you are 'dual income, no kids', you're not going to be able to afford anything."

"I think we're becoming a soft touch," warned Cllr Andrew Gibson, who cited the example of the nearby Doon Street tower which was approved without any affordable housing.

Section 106: A new library for Waterloo?

There was also some debate about the section 106 package of measures to mitigate the scheme's impact on its surrounding area, with members keen to see increased contributions towards the long-held aspiration for a permanent replacement for Waterloo Library.

Cllr Dodsworth spoke forcefully of the importance of a high-quality library for local social cohesion as a place where people of all backgrounds, rich and poor, can interact.

What do you think of the towers planned for the South Bank?