Boris Johnson has told LBC radio that he reduced the height of the controversial "three sisters" skyscrapers at Waterloo even though the design changes happened nearly a year before his election as Mayor of London. 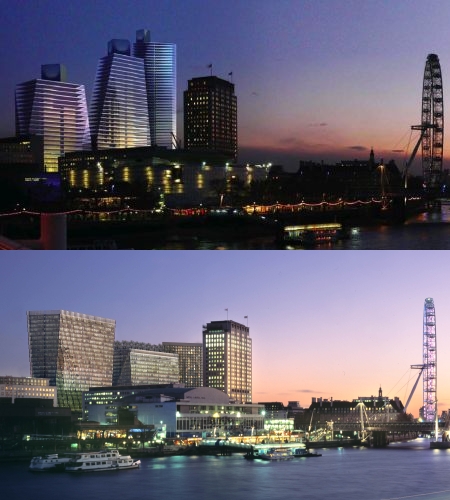 Boris Johnson claims to have slashed the height of these proposed towers at Waterloo. Unfortunately the design change predates his arrival at City Hall by nine months

Boris Johnson was appearing on LBC 97.3's Nick Ferrari breakfast show to mark the first anniversary of his election to City Hall.

LBC had assembled pre-recorded questions to the Mayor from politicians and commentators including London Assembly member Val Shawcross, Keith Vaz MP and Evening Standard columnist Simon Jenkins, a leading opponent of tall buildings in the capital.

Mr Jenkins raised the issue of the Mayor's support for P&O's controversial redevelopment of the Elizabeth House site in York Road at Waterloo which has this month been the subject of a public inquiry.

"The Evening Standard mischievously printed a picture of the three ugly sisters before I performed plastic surgery on them and greatly improved them," replied Mr Johnson.

"I lopped several storeys off the ugly sisters; I carpeted them with trees on the top.

"They present a very, very different aspect now to that that appeared in the Evening Standard which was indeed malevolent and hostile ... it was a kind of paparazzo shot of a cellulite version of the ugly sisters."

Whilst it is true that the Standard has repeatedly printed a very out-of-date picture of a previous design for the three towers, the Mayor's claim to have had a hand in altering the design of the buildings is more questionable.

The current proposed heights of the three towers – 117 metres, 90 metres and 107 metres – were established in a planning application submitted to Lambeth Council in July 2007 – nine months before Boris Johnson became Mayor of London.

Mr Johnson's claim to have "carpeted them with trees" will also come as a surprise to architect Graham Morrison of Allies and Morrison – the plan to have trees on the roof of the centre tower was a key element of the July 2007 planning application.

Once in office Mr Johnson concluded that "the proposal is unacceptable in strategic planning terms due to the impact of the proposal on the setting of the Westminster World Heritage Site, the view from the footbridge in St James's Park, the setting of County Hall and the Royal Festival Hall from various viewpoints".

But in October 2008 the Mayor performed a U-turn and decided that the proposal was acceptable after all.

Earlier this month Sir Simon Milton, the deputy mayor responsible for planning issues, sent a letter of support for the P&O scheme to the planning inspector presiding over the public inquiry into the proposals.

English Heritage and Westminster City Council have argued that the towers – which will be visible from Parliament Square – will have a devastating effect on the Westminster World Heritage Site.

In February Simon Jenkins wrote in the Evening Standard: "The effect of the [Doon Street] tower and the now-dubbed Three Ugly Sisters will be of a wall of unrelieved, energy-guzzling glass gashed across the vista of central London just where the river performs a sweeping curve between Westminster and the City.

"What will Johnson want next: a nuclear power station in Belgrave Square?"