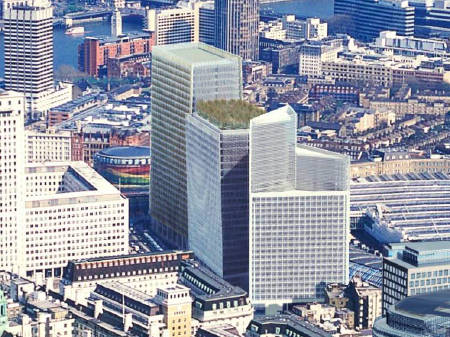 A planning application for a development – designed by Southwark-based Allies & Morrison – of two office buildings and a residential building containing 280 flats was submitted in July.

Now the Commission for Architecture and the Built Environment has delivered its verdict on the scheme. CABE's design review panel has pronounced itself "unconvinced" by the proposals: "...we do not think that it has been demonstrated that this quantum of development, distributed on the site in the manner proposed, results in a successful scheme," notes the watchdog.

Last month the scheme hit a snag over the level of affordable housing to be provided – and the development's impact on the Westminster world heritage site.

Although the proposed scheme by P&O and Morgan Stanley Real Estate fits the Mayor of London's aspiration to provide new offices and homes at Waterloo, it seems that the application is in for a rough ride through the planning process.

At the end of October discussion of the scheme was removed from the agenda of Lambeth's planning applications committee at the last moment, but the published report reveals the behind-the-scenes battle between council planners and the scheme's developers.

The effect of major developments on London's two world heritage sites – the Tower of London and the Palace of Westminster – has been a high-profile issue this year.

The Elizabeth House development will be visible from Parliament Square looking north-east in the gap between the Houses of Parliament and Portcullis House.

ICOMOS-UK, the International Council on Monuments and Sites, has called for the application to be put on hold until a visual impact methodology is put in place to allow the scheme's impact to be assessed.

P&O's advisers say that the three buildings' impact on the World Heritage Site will be evident but not damaging.

The development's impact on the setting of the Palace of Westminster is also a major factor in English Heritage's likely strong objection to the scheme.

The Mayor's London Plan sets a target for 50 per cent of all new housing to be "affordable" (social rented or shared ownership).

The York Road application was originally made with 41 per cent provision, but the applicants have subsequently submitted an appraisal suggesting that the scheme can only afford 19 per cent taking account of the section 106 obligations negotiated by officers.

In an interim report for members of the Planning Applications Committee, Lambeth officers warn that the level of affordable housing in the application as it now stands would be unacceptable to the Mayor of London. "In land use terms the lack of affordable housing would in itself lead to a recommendation for refusal," notes the Lambeth officers' report.

The report also indicates that P&O has tried to justify its low level of affordable housing with reference to Coin Street Community Builders' Doon Street development – approved by the council in August and subsequently called in for public inquiry – which does not include any affordable housing.

Lambeth's planning officers commissioned a report from Atis Real that suggests that the scheme would be viable with 40 per cent affordable housing although P&O is disputing these findings.

The scheme has received backing from Network Rail, the National Theatre, the London Eye, King's College London and the South Bank Employers' Group.

Official objections have been tabled by organisations including the City of Westminster and the Westminster Society. Guy's and St Thomas' NHS Foundation Trust has expressed serious concern about the impact of the demolition and construction on the operation of nearby St Thomas' Hospital.

Waterloo Community Development Group has concluded that the scheme's benefits outweigh its concerns, but has criticised the lack of a masterplan for the redevelopment of Waterloo Station, the Shell Centre and the Hungerford Car Park and called for a greater proportion of affordable housing.