Edinburgh statue for fireman who died in Tooley Street blaze

A statue of James Braidwood has been unveiled in Edinburgh's Parliament Square. The pioneering firefighter died in the Great Fire of Tooley Street in 1861. 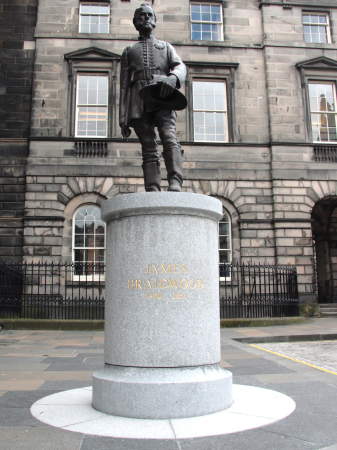 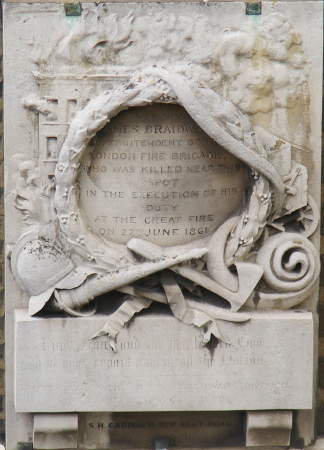 This memorial to James Braidwood can be seen at the corner of Tooley Street and Cottons Lane. It is best seen from the footbridge. 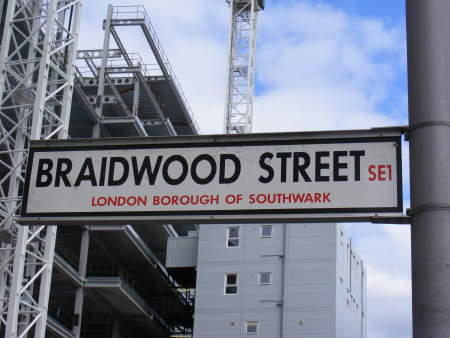 Braidwood Street is the service entrance to the More London estate

Commuters streaming across Tooley Street on the footbridge linking London Bridge Station and the Cottons Centre could be forgiven for not noticing the memorial on the corner of Cottons Lane which commemorates James Braidwood, head of the London Fire Engine Establishment, who was killed by a falling wall while fighting a massive blaze at Cotton's Wharf in June 1861.

Now a statue of 'the father of firefighting' has been installed in Edinburgh where he established the world's first municipal fire brigade in 1824.

The statue – by Kenneth Mackay – was unveiled on Friday by Prof Sir Timothy O'Shea, principal of Edinburgh University.

The campaign to have the statue installed was led by Dr Frank Rushbrook, 93, a former firemaster at Lothian & Borders Fire Brigade.

"I'm a great admirer of James Braidwood, because he was the first fire chief to approach firefighting from a scientific point of view," explains Dr Rushbrook. "Much of what he wrote still applies today, he was way before his time."

The ceremony involved vintage fire appliances pulled by horses and firefighters in historic uniform. Members of the Braidwood family attended the event in Edinburgh's Parliament Square.

Back in Southwark the distinguished firefighter's name lives on in Braidwood Street, now the portal to the subterranean servicing area of the More London estate. It was at Braidwood Street that London's modern firefighters found themselves pumping out an estimated 7 million litres of water earlier this year in the 'great flood of Tooley Street'.