The Great Fire of Tooley Street: 150 years on

The London Fire Brigade this week commemorated the 150th anniversary of the outbreak of the Great Fire of Tooley Street which burned for two weeks in 1861. 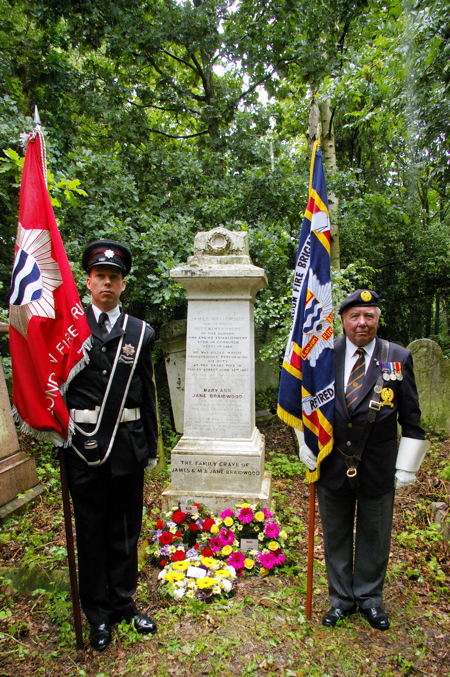 The fire claimed the life of the the capital's first fire superintendent James Braidwood and the aftermath of the blaze led to the founding of the fire service as we know it today.

The ceremony was held at Braidwood's tomb in Abney Park Cemetery, Stoke Newington.

James Braidwood lost his life while tackling the fire at Cotton's Wharf on Tooley Street on 22 June 1861.

His death was a catalyst for change, leading to the development of the modern day fire brigade. Previously, firefighters would usually only attend fires at buildings with insurance.

Braidwood's death and the cost of the Tooley Street fire led to the founding of the Metropolitan Fire Brigade, under which firefighters would attend blazes at every building, regardless of whether they had fire insurance.

It took two weeks to put the fire out and cost an estimated £2 million in 1861.

"James Braidwood is a central figure in the history of London Fire Brigade as we know it today," says Rita Dexter.

"His dedication to protecting the capital and his fascination with preventing fires gave the Brigade a strong foundation and helped to shape it into what it is now – the world's third largest fire and rescue service."

Queen Victoria was particularly concerned about the fire and in her diary she wrote that "poor Mr Braidwood … had been killed … and the fire was still raging. It made one very sad".

Some of Braidwood's key achievements include introducing a standard uniform for the capital's firefighters and being one of the first officers to raise awareness of the importance of fire safety in preventing fires from happening in the first place.

He was consulted on fire prevention by industries and large businesses and wrote extensively about the need for better construction, storage and fire doors in warehouses.

The London Fire Brigade Museum has prepared a special section about the Tooley Street fire on its website. The museum will also hold a public open day on Friday 5 August.

A statue of James Braidwood was unveiled in Edinburgh three years ago. Today in Southwark he is remembered in the name of Braidwood Street which now forms the goods entrance to the More London Estate.