Great Fire of Southwark: fireworks from cathedral tower 800 years on

The 800th anniversary of the Great Fire of Southwark which swept through the area on 11 July 1212 has been commemorated with a special service at Southwark Cathedral attended by members of the London Fire Brigade. 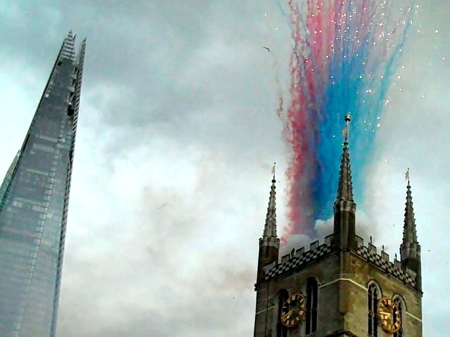 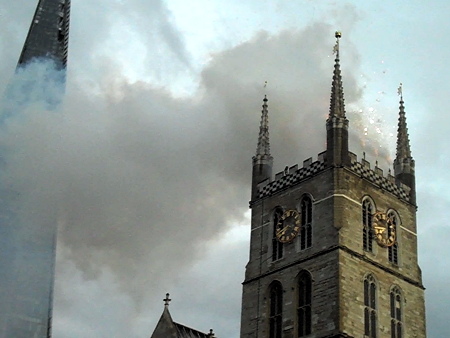 Firefighters from Southwark and Dockhead fire stations, as well as senior officers of the London Fire Brigade, came to the service of Choral Evensong on Tuesday for the laying-up of the brigade's standards and the dedication of new flags for use on ceremonial occasions.

The lessons were read by London Fire Commissioner Ron Dobson and James Cleverly AM, chair of the London Fire & Emergency Planning Authority.

On St Benedict's Day in 1212 a great fire swept through Southwark destroying much of the borough and the priory that is now Southwark Cathedral. Contemporary records suggest that more than 3,000 people were killed.

In his sermon the Dean of Southwark, the Very Revd Andrew Nunn, talked about the significant fires in Southwark that have shaped local and London history.

Starting with the 1212 fire – known as the Great Fire of London until the 1666 fire in the square mile – he went on to describe the 1861 Great Fire of Tooley Street, noting that it was this blaze and the death of James Braidwood, superintendent of the London Fire Engine Establishment, that led to the formation of the modern fire brigade.

He also recalled how firefighters had doused the roof of the cathedral to protect the building when in 1978 the warehouses at adjacent New Hibernia Wharf had caught fire in mysterious circumstances.

"We have seen our share of fires in this neighbourhood and It is good that we have the successors of the London Fire Engine Establishment – and inheritors of the heroic witness of James Braidwood – here with us this evening, laying up old standards and receiving newly dedicated ones to carry with pride," said the Dean.

"Those old standards will remain in this building as a witness to the wonderful part played by the London Fire Brigade in protecting us and our city from the destructive, terrifying power of fire."

London Fire Commissioner Ron Dobson said: "Today we remember London's fire past and celebrate the fire and rescue service we have today. I am delighted that we are dedicating our new ceremonial flags known as brigade standards in the fantastic setting of Southwark Cathedral."

The service was followed by two fireworks displays from the cathedral tower – one in the daylight and another after dark.