Young people from Southwark and Lambeth have spent the summer working on a range of arts projects on the South Bank and Bankside, many of them linked to the Cultural Olympiad. 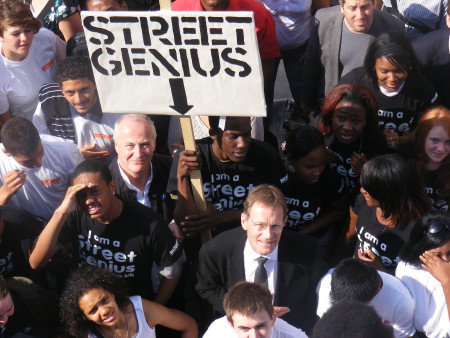 Street Geniuses on the South Bank in July

The Street Genius scheme is organised by SOWF (Some Other Way Forward) which aims to make sure that local young people benefit from the presence of the cultural attractions on the South Bank and Bankside.

The 54 'Street Geniuses' are all aged between 16 and 19 and have been recruited via local youth groups. Their placements with cultural organisations are taking place between March and December.

Last week the Street Geniuses held their 'wrap party' at Tate Modern to mark the end of the Cultural Olympiad Open Weekend which was the culmination of many of their placements.

The party was organised by Ernest Kargbo and Kerry Brown who spent the summer working with Better Bankside to put on a fitting celebration of the Street Genius project.

Kerry got involved with the Street Genius scheme through the Mint Street youth club which she belonged to. After an interview at the offices of Better Bankside she was selected as one of the Street Geniuses and set to work planning all aspects of the final party.

She says that one of the biggest challenges was managing the team of volunteers on the day of the party and making sure everyone had a job to do.

Kerry says that she has enjoyed getting to know local businesses and organisations and finding out what goes on inside some of the buildings she walks past every day.

• Last Monday the Imperial War Museum's Street Geniuses met the Prime Minister. They have put together an exhibition about young people in Southwark and Lambeth during World War I which will be shown at the reopened John Harvard Library next July after a tour of South London venues.

• Find out more about the work of the Street Geniuses at www.sowf.co.uk/?q=node/5