A collection of paintings depicting pearly kings and queens in the Old Kent Road is to be auctioned at Bonhams later this month. 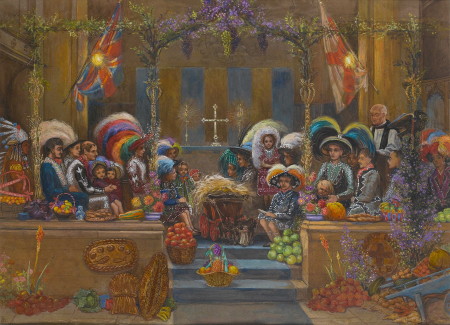 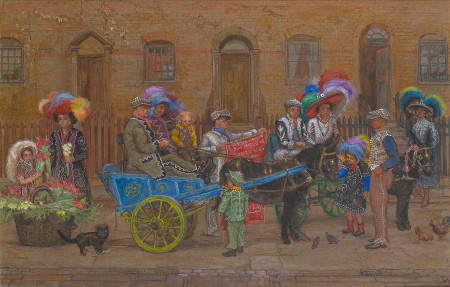 The collection of eight gouaches and studies by the Italian artist Estella Canziani (1887-1964) currently belongs to the Folklore Society and will be sold at auction on Wednesday 29 October.

Local market traders (costermongers) took part in the annual harvest festival service at the church of St Mary Magdalene in Massinger Street just off the Old Kent Road, close to where the Lidl supermarket now stands. The church was destroyed in the Blitz.

The service of lessons and hymns, which took place every second Sunday in October, was preceded by a procession of costers riding their donkey carts and dressed in finery bringing gift baskets which were distributed to the poor.

The precise origins of the costermongers' tradition of pearly kings and queens are unclear. Today around 30 families keep the custom alive and each London borough has a king and queen. Three London churches north of the river now host costermongers' harvest festival services in the autumn.

Estella Canziani was the daughter of the artist Louise Starr Canziani and was thus bought up with an interest in the arts. This interest was further developed when she joined the Folklore Society in 1910 which fostered in her an interest in folklore and anthropology.

She also felt strongly about the need for social reform and education and it was these interests that formed the background for the series of paintings which the society is to sell.

• Earlier this year the present Pearly Queen of the Old Kent Road, Doreen Golding, was depicted on a hoarding in St Thomas' Street by street artist Pure Evil.