Town criers from around the country rang their bells as the coffin of Peter Moore, town crier of London and Southwark, left St George's Cathedral after his funeral Mass. 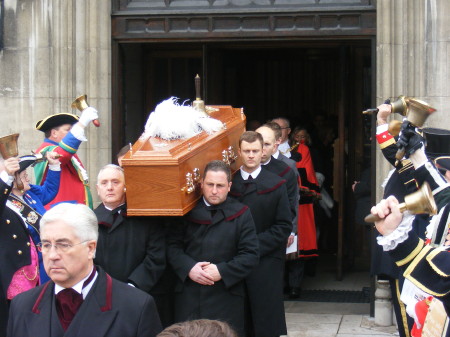 Town criers ring their bells as the coffin leaves the cathedral 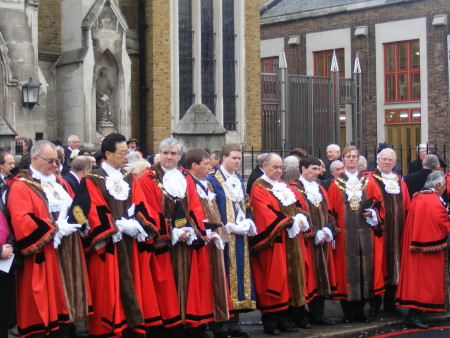 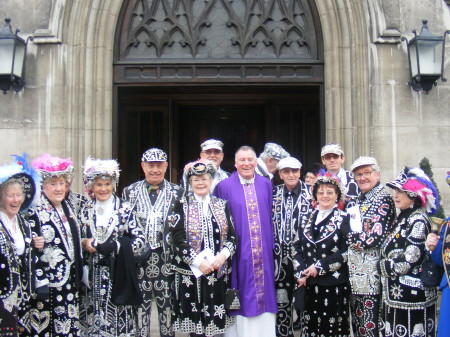 Peter Moore, who died in December aged 70, was a familiar figure at civic and public events across London. He had a particular association with the borough of Southwark where he was also deputy macebearer as well as the town crier.

The Lord Mayor of Westminster, Cllr Duncan Sandys, was joined by mayors of many of London's 32 boroughs, including Southwark and Lambeth.

In his tribute at the start of Mass, Peter's son Jamie Howard quoted Samuel Johnson: "I can say with all certainty that dad was neither tired of London nor tired of life."

"Dad's motto was 'have bell, will travel' – and boy did he mean it. Going through old pictures of him, I discovered photos of him in every corner of the world, ringing his bell."

He continued: "It felt alien to see dad at home or when out and about when not in his costume. At times I think he felt that it was glued to his body. It became a part of him. The costume gave him power, it gave him authority. It gave him happiness."

Simon Hughes MP told the congregation: "He added to the history of London, to the character of London, to the fun of London. With his passing London is the poorer, but for his life London is definitely the richer. And although there will never be his like again, we are all privileged to know that he made a phenomenal difference."

John Robinson, secretary of the Loyal Company of Town Criers, said: "I have met town criers from all over the world, and I have only ever met one Peter Moore." He closed his tribute by saying the town criers' prayer.

The lesson was read by Cllr Jeff Hook, Mayor of Southwark, and the intercessions were led by past Mayor Hilary Wines.

In his homily Canon Cronin described Peter as "the perfect raconteur" who "excelled in being an entertainer and ambassador for London".

The Revd Neil McKinnon, rector of the Anglican parish of St Matthew's-at-the-Elephant, took part in the procession.

Southwark Council was well represented at the service by councillors past and present, including council leader Nick Stanton, and chief executive Annie Shepperd.

Many of London's pearly kings and queens were also in attendance.

Peter's body was taken by horse-drawn hearse to Honor Oak Crematoriam for a private committal.