City Hall staff, representatives of London boroughs and members of the public joined Mayor of London Boris Johnson for the first mayoral carol service at Southwark Cathedral on Wednesday. 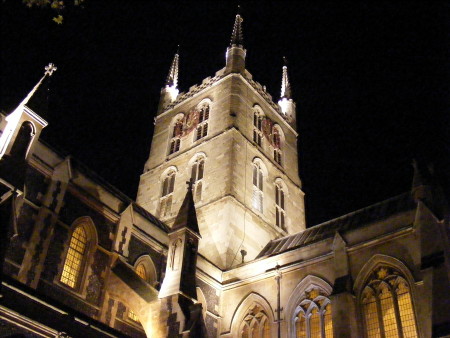 The Dean of Southwark, the Very Revd Colin Slee, welcomed the congregation to the first Greater London Authority carol service since the capital's government moved to Southwark in 2001.

"You took your time," he observed wryly.

He added: "But I personally hope that the recognition is never going to be such that we become too respectable on this side of the river. It has always had a certain radical culture and non-conformity that we should relish.

"And I am especially pleased to read in the papers today that the GLA is not subscribing to those who seek to emasculate Christmas of Christ."

The latter comment is a reference to recent publicity suggesting that the Mayor had overruled City Hall staff who wanted to avoid explicit reference to Christmas in the authority's seasonal festivities.

"I want to congratulate the GLA on having this carol service and to make sure that we don't have political correctness as the end of all civilisation."

Music at the service was provided by the Southwark Cathedral Singers and the Tribe of Judah Gospel Choir.

Even at this point it was possible to detect the Mayor's crusade against so-called political correctness.

Members of the congregation in the packed cathedral included many of the mayors of the capital's 32 boroughs.

Environmentalist Stanley Johnson, father of the Mayor of London, was also present.

During the service a collection was taken for the Mayor's Fund for London which was established by Boris Johnson this year to support disadvantaged children, young people and families in the city.