What made the Millennium Bridge so wobbly?

Eight years after the Millennium Bridge's infamous wobble caused it to be closed to the public on its opening day, a new study finally explains what happened by looking at how humans stay balanced while walking. 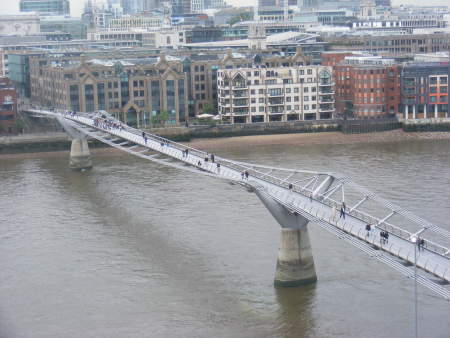 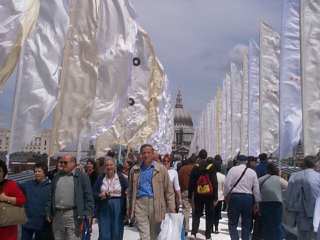 The bridge was lined with banners on its opening (and closing) day: 10 June 2000

On its opening day in June 2000 the Millennium Bridge experienced unexpected swaying due to the large number of people crossing it.

The Norman Foster-designed bridge then remained closed until February 2002 while engineers fitted dampers to suppress the wobble.

The same pedestrian-structure interaction has also been identified on several other bridges, including Bristol's Clifton Suspension Bridge.

New research by civil engineers at the University of Bristol shows that the phenomenon is not related to the structural form of the bridge, but rather the behaviour of the pedestrians.

Balance is achieved by changing the position of foot placement for each step, based only on the final displacement and speed of the centre of mass from the previous step.

The same Balance strategy as for normal walking on a stationary surface was applied to walking on a laterally swaying bridge.

Without altering their pacing frequency, averaged over a large number of cycles, the pedestrian can effectively act as a negative damper to the bridge motion, which may be at different frequency. Hence the pedestrian can inadvertently feed energy into bridge oscillations.

"It is clear that the motion of the bridge affects the force from the pedestrian, rather than the pedestrian simply applying an external force," says Dr John Macdonald, senior lecturer in civil engineering.

It has generally been thought the Millennium Bridge 'wobble' was due to pedestrians synchronising their footsteps with the bridge motion. Now the Bristol researchers say that this is not supported by measurements of the phenomenon on other bridges.

The researchers found, to their surprise, that pedestrians walking randomly and keeping Balance as normal can cause large bridge sway.