A delft 'marriage dish' made at Southwark's Pickleherring pottery in 1650 has been sold to the Milwaukee Art Museum. 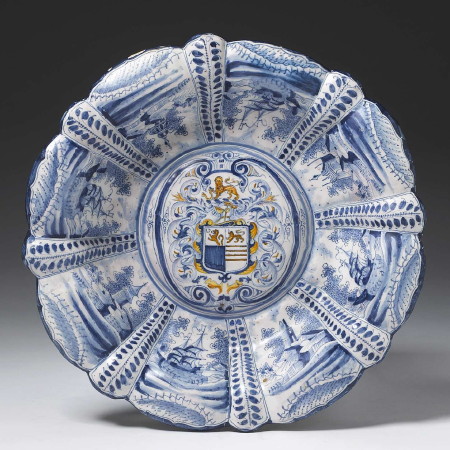 The rare item was included in a British ceramics auction at Bonhams in New Bond Street.

The dish is painted with a coat of arms uniting the Markham and Faringe families. The border is moulded with a series of panels painted with a landscape in dark blue. The curious buildings and ships are painted in a way that identifies the dish as the product of the Pickleherring factory at Southwark.

The pottery stood on the land now occupied by City Hall and shared its name with Pickle Herring Street which ran in front of today's Potters Fields Park. Vine Lane, on the east side of the Unicorn Theatre, ran directly to Pickle Herring Stairs.

"I was excited when I discovered the Markham dish in a house in East Anglia," says John Sandon, Bonham's director of British and European ceramics. "The owners had hoped it was something special and were particularly pleased when I was able to confirm that this is an unrecorded product of the Pickleherring pottery.

"This dish is a very rare survivor for it was made in 1650 in the period immediately after the execution of King Charles I. During the Commonwealth period, Oliver Cromwell and his supporters advocated Puritanical doctrines. A costly pottery dish, proudly celebrating a marriage, was contrary to the political sentiments of the time, so few were made.

"Delft potters were mostly Royalists and a few years later in 1660, when the monarchy was restored, the Pickleherring factory at Pickleherring Quay in Southwark created many splendid souvenirs of Charles II and his Queen."

The dish was bought for £54,000 on behalf of the Milwaukee Art Museum where it will be displayed. British settlers who went to America in the 17th century took London delftware with them and the distinctive pottery was used throughout the American colonies.

Examples of Pickleherring delftware can be found at the Fitzwilliam Museum in Cambridge. Delft is named after the city in Holland where this kind of pottery was first made.