The Museum of London has unveiled three ceramic bowls recently found during archaeological work for the new Thameslink viaduct at Borough Market. 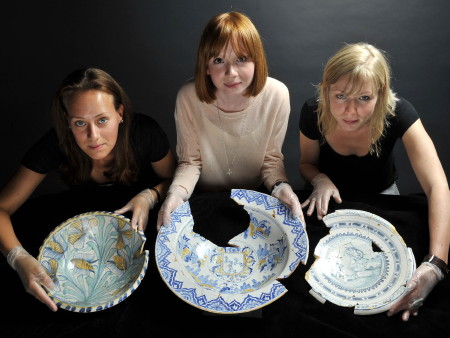 The intriguing collection offers a picture of what could have been displayed on a dresser in a London home during the 17th century.

The three objects consist of a 'Tulip Charger' bowl, which dates to the 1660s (the decade of the Great Fire), a 'Dutch-style boy and the dog bowl' dating from the same time and a bowl with the coat of arms of the Leather Sellers Company dated 1674, which celebrates the marriage of Nathaniel Townsend, who was admitted to the company in 1673.

Much of the tin glazed ware was made in Southwark from about 1613 at pothouses in Rotherhithe, Horsleydown, Abbots Lane and at Montague Close.

"They are beautiful objects: truly unique and unusual finds," says Roy Stephenson, head of archaeological collections and archive at the Museum of London.

"What's really interesting about them is that we now have a group of objects that offer an astonishing snapshot of a Londoner's life at this point in history."

The bowls were excavated from a Network Rail archaeological site next to Borough Market where a second rail bridge will be built next to the existing Victorian structure as part of the Thameslink Programme.

The excavation has been specifically designed to preserve historic features wherever possible such as the Victorian roof of the market which will be restored and reinstated at the end of construction.

"Network Rail has some unusual challenges," says Jerry Swift, head of corporate social responsibility. "Usually it's working with the glorious but often challenging legacy that our Victorian forebears left us.

"This time, as we have to build foundations to carry the new viaduct at Borough Market, we find ourselves delving even deeper into London's past.

"We recognise that providing a rail network that Britain can rely on can come at a price to that heritage. We are delighted to be working with the Museum of London to learn what we can during this key construction phase."

Towards the end of the 16th century London was the first major city to produce tin-glazed ware successfully and on a commercial scale. The term 'delftware' was widely used from the 18th century onwards to refer to tin-glazed earthenware made in Britain, rather than the products of the famous Dutch centre of Delft.

The chief attraction of tin-glazing is in allowing potters to decorate their wares with coloured pigments applied over a lead glaze made opaque by the addition of tin.

• The intriguing bowls are now on display in the War, Plague and Fire gallery at the Museum of London. Entrance is free.