Southwark delftware cats to go under the hammer in pottery sale

Two delftware cats probably made in Southwark more than three centuries ago are among the lots in Bonhams Fine British Pottery sale on Wednesday 21 May. 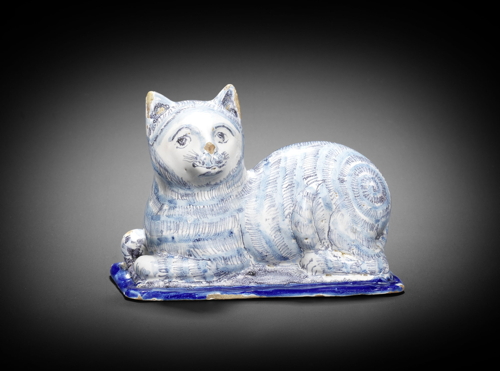 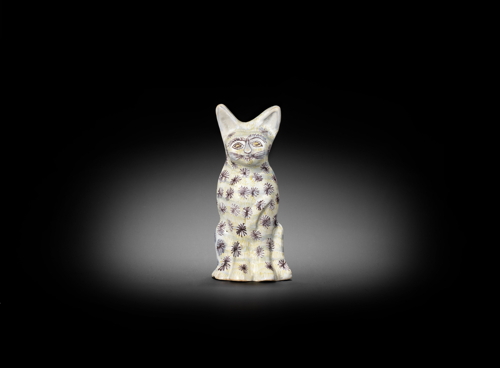 An extremely rare English delftware model of a cat reclining, probably created in Southwark, dates from circa 1660-80 and is estimated to sell for Ł40,000-Ł50,000.

Most of the recorded cat models in English delftware are in the form of jugs and only one similar example of a reclining cat is known, in the Fitzwilliam Museum. This model, with fur carefully painted in manganese and blue to represent tabby markings, lies content with front paws tucked under its body and tail curled around its side.

Another feline model sits among the highlights in the sale; an important English delftware cat jug, dated 1677, is valued at Ł35,000-45,000. The cat is seated upright, with its tail around its left side, and is decorated in manganese, yellow and light blue with a coat of stars.

A number of dated delftware cat jugs are recorded that date from between 1657 to 1677. These seem to have had a decorative purpose and were perhaps associated with marriage gifts as some examples bear initials painted in triangle formation.

Fragments of these jugs have been excavated in London associated with delftware kilns in Southwark and Vauxhall and this example was probably created at one of these locations in the mid 17th century.

English delftware is the name given to tin-glazed pottery made in the British Isles between 1550 and the late 18th century.

English tin-glazed pottery was named 'delftware' as it copied the famous pottery from the Netherlands.

Delftware kilns are known to have existing on the site of Potters Fields Park and in Great Suffolk Street.

In 2008 a delft 'marriage dish' made at Southwark's Pickleherring pottery in 1650 was sold to the Milwaukee Art Museum for Ł54,000.

• Full details of the sale are available on the Bonhams website