Last orders at The Wheatsheaf as Thameslink work gets under way

The Wheatsheaf pub in Stoney Street closed last week as work on the long-awaited Thameslink viaduct through Borough Market gets under way. 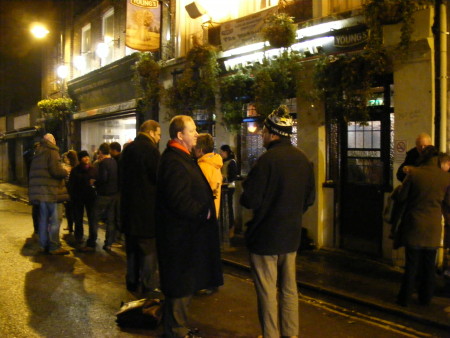 Late-night drinkers outside The Wheatsheaf on its final evening 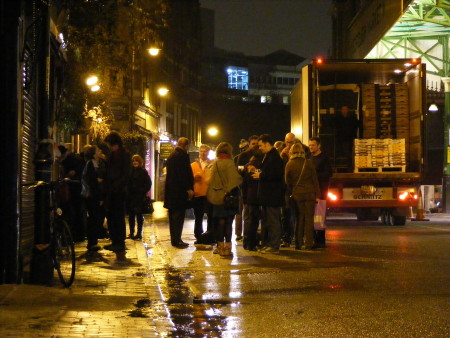 The Wheatsheaf was packed to the doors for a farewell party with live music last week as it prepared to close its doors for the last time until Network Rail's Thameslink Programme is completed.

Last year a book was published featuring images of many of the pub's familiar faces.

Over the next few years a new viaduct will be built through Borough Market to relieve congestion at this longstanding rail bottleneck as part of the expansion of the north-south Thameslink rail network.

The scheme's impact on Borough Market has been the subject of two public inquiries and much debate and now work is finally beginning in earnest.

Since mid-December the small businesses in the buildings to be demolished as part of the railway viaduct scheme have been moving premises or closing down.

The Steven Rayner hair salon in Borough High Street and the nearby Londis store both closed in December to allow Network Rail to take over the building.

At the corner of Bedale Street estate agent Stirling Ackroyd moved its Bankside office further down Borough High Street just before Christmas – although its brightly coloured shopfront has not been universally welcomed.

Round the corner Quinlan's opticians shut up shop early in the New Year.

Gastronomica – formerly of Bedale Street – will now trade from its market stall and nearby Neal's Yard Remedies has relocated to a smaller shop in Stoney Street.

However Neal's Yard Remedies' new shopfront in Stoney Street has not pleased Southwark planners who have authorised enforcement action to seek the removal of a fascia they say "does not sympathetically correspond with the open market character of this part of Stoney Street".

After Easter Borough Market traders currently in Three Crown Square will move to a temporary covered space in the Jubilee Market near Winchester Walk.

Meanwhile to the east of Borough High Street Lithuanica has closed its shop on Railway Approach and La Spezia – which claims to be London's oldest family-run Italian restaurant – has temporarily closed. According to the restaurant's website it will reopen in "Spring 2009".