Mayor of London Boris Johnson visited Elephant & Castle on Sunday to address the Latin American community so we asked for a progress report on the removal of the southern roundabout. 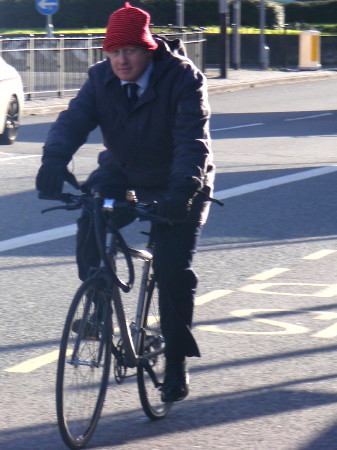 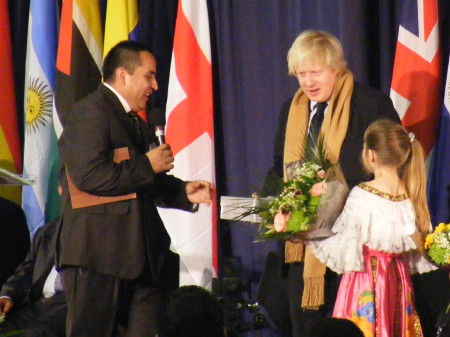 The Mayor received gifts including a scarf made of alpaca wool, a commemorative plaque and two bouquets

When Boris Johnson surveyed the Elephant & Castle's southern roundabout as he prepared to cycle away, the London SE1 website took the opportunity to ask the Mayor when he would sign off the much-delayed proposals to remodel the junction to provide surface-level pedestrian crossings.

Mr Johnson chuckled knowingly and replied with a grin: "Watch this space".

Just before Christmas Mr Johnson told the London Assembly that he expected Transport for London and Southwark Council to reach agreement about the future of the road junction some time in Spring 2009.

The Mayor took to the road just outside the Metropolitan Tabernacle. Last November he was quizzed at a City Hall meeting by London Assembly member Val Shawcross who pressed the Mayor on the cycle accident statistics for the two junctions at the Elephant & Castle and the link road in between.

Boris Johnson was at the Elephant & Castle Leisure Centre on Sunday to address 2,000 members of London's Latin American community.

He had attended a pre-election hustings meeting with other mayoral candidates in late April 2008 and had promised to make another visit if elected.

The Mayor received a rapturous welcome and thrilled the crowd by peppering his speech with a few Spanish phrases. He was rewarded with a standing ovation at the end of his address.

Mr Johnson described himself as "a fervent admirer of Latin American and Ibero-American culture".

He avoided any direct reference to the Elephant & Castle regeneration – which could squeeze out small Latin American businesses from the area – and instead fell back on a familiar litany including his extension of the validity of the Freedom Pass, Crossrail, the London Tideway Tunnel sewer and support for the London Living Wage.

The Mayor also reiterated his controversial support for an amnesty for illegal immigrants.

"It's not because I want to encourage people to break the law, but I want to help people who may have been here for a very long time with uncertainty to regularise their position, to take part in the economy and to pay their taxes like everybody else."

Mr Johnson was introduced by journalist Isaac Bigio who referred to a proposal aired during the mayoral election campaign to make Elephant & Castle the city's Latin quarter along the lines of Chinatown.

The meeting was also addressed by Edmundo Ravelo, pastor of the Comunidad Cristiana de Londres which holds its Sunday services in the Elephant & Castle Leisure Centre, and his son, David Ravelo, the church's youth leader.