Plans for an apart-hotel on the site of the Old Cinema Antique Warehouse in Tower Bridge Road and change of use of the empty office building next door were given the thumbs-up by Southwark councillors this week. 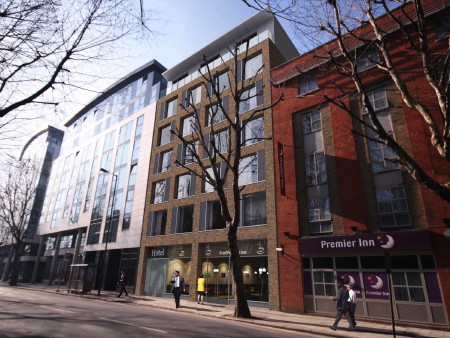 Sunlight Projects wants to fill in the gap next to the Premier Inn Tower Bridge and convert the adjacent unoccupied office block above the Fine Life Shopper store to apart-hotel use. The scheme is designed by local firm Weston Williamson.

Sunlight, a well-established local developer, already operates the Think Tower Bridge apart-hotel just up the road at Maltings Place and is in the process of opening a similar operation at 190 Bermondsey Street.

Sunlight's Zoe Lister told the committee that her company's apart-hotels are priced in line with Premier Inn and Travelodge but with "a superior service". "There's a niche for a slightly different product," she said.

An apart-hotel is intended for stays of up to three months and each room includes a kitchenette.

Asked by committee chair James Gurling about the effect that a proliferation of visitor accommodation has on an area, Mrs Lister argued that an apart-hotel "has a very different impact than a traditional hotel" and that without the restaurants and services normally associated with hotels, guests are more likely to give their custom to local businesses.

She told councillors that there is a "very strong demand" for visitor accommodation in the area.

The latest application – which was unanimously endorsed by the planning committee – follows the launch of an appeal by Sunlight Projects against Southwark's failure to determine an earlier application within the statutory time period.

740 hotel rooms could be approved in north Southwark this year

Cllr Gurling asked officers to provide a running total of the number of hotel rooms approved by Southwark Council during the current financial year.

"I think it's important for us to keep an eye on this as a committee," he said.

"I am very much aware that in this area and at the border with Lambeth there are loads of hotels in the pipeline."

Only one hotel has been directly approved by the council this year – the Travelodge in Waterloo Road which will have 284 rooms. In addition the boutique hotel at the former St Olave's Grammar School in Tooley Street which was approved by a planning inspector will provide 56 rooms.

If communities secretary Hazel Blears gives the go-ahead to the Mirax-Beetham Tower in Blackfriars Road, that will add 261 rooms to the total.

With the Tower Bridge Road scheme included, 740 hotel rooms – all in SE1 – could be approved in Southwark this financial year. A further 330 rooms in Bear Lane were approved at the end of March 2008.

A 2006 study by the Greater London Authority indicated that 2,500 additional hotel rooms would be required in the borough between 2005 and 2027.