The public inquiry into two proposed skyscraper developments near Blackfriars Bridge has heard closing submissions from the schemes' supporters and objectors. 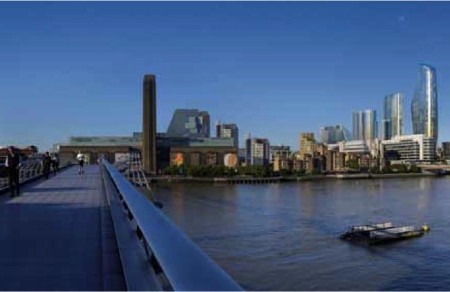 Beetham's 51-storey hotel and residential development at 1 Blackfriars Road was approved by Southwark councillors in December 2007.

Circleplane's development of an office tower and a taller residential tower at 20 Blackfriars Road – south of Stamford Street – was given the green light by councillors in January this year.

Earlier this year communities secretary Hazel Blears ordered a public inquiry into the two proposals in the light of strong representations from the City of Westminster and the Royal Parks Agency.

Planning inspector John Gray has heard many days of evidence and made several site visits to other buildings by the same architects in London and Manchester since the inquiry began on 9 September.

He will now write a report and make a recommendation to the secretary of state who will make the final decision which is expected to be announced in the spring of 2009.

During the inquiry the Planning Inspectorate received a letter sent on behalf of Mayor of London Boris Johnson by his deputy mayor Ian Clement overturning the support of the previous City Hall regime for tall buildings at Blackfriars Road.

"I am of the view that the applications are unacceptable due to the inappropriateness of the sites for very tall buildings; and the impact on the view from the footbridge in St James's Park," wrote Mr Clement.

He added that "the proposals would not make a coherent location for an economic cluster".

Making his closing submissions for Waterloo Community Development Group, Michael Ball told the inquiry that the proposed "sarcophagus-like" tower at 1 Blackfriars Road would cause "irreparable harm to London's culture and leisure quarter" and the scheme's "modest benefits" would not justify the grant of planning permission.

Mr Ball accepted that the design by Ian Simpson is "ingenious and of high quality" but argued that it "ignores its context".

He also questioned whether Blackfriars Road is a coherent location for a cluster of tall buildings, contrasting the application sites with the transport hubs at London Bridge, Waterloo, Vauxhall and Elephant & Castle which are all designated for high-rise buildings.

WCDG was less critical of the 20 Blackfriars Road scheme many aspects of which were welcomed by Mr Ball, although he was concerned about the possible effects of the tall building on the wind experienced by pedestrians. He pointed out several locations in Waterloo, such as the corner of Sandell Street next to the Capital Tower, where pedestrians are "blasted by unpleasant and dangerous gusts".

Mr Ball also voiced objections to the omission of social rented housing on the 1 Blackfriars Road site with provision instead being made near New Kent Road.

The City of Westminster and the Royal Parks Agency were represented by Richard Banwell who explained that his clients' objections centred on the towers' impact on the view towards Horseguards Parade from the bridge in St James's Park.

Mr Banwell described the park as the "true jewel in the capital's crown" that should be protected for future generations. The proposed tower at 1 Blackfriars Road, he said, would be a "major intrusion" into the "quintessentially picturesque composition".

"Neither the city council nor the Royal Parks have any hostility to contemporary architecture, but very tall buildings must always be acceptable within their wider context," he added.

For Southwark Council Timothy Corner QC argued that "each of the application sites comprises a location appropriate for a building of the height proposed".

"The tower at 1 Blackfriars Road is a tall building of exceptional architectural quality," said Mr Corner. "Its delicately sculptural form will be a new and distinctive addition to the London skyline, and will make a positive contribution to the south bank.

"The two towers at 20 Blackfriars Road display an exceptional architectural quality of materials, space, and form, and a complexity borne out of their relationship with their surroundings."

Rejecting the criticism by the objectors, he said: "These are superb buildings. They will enhance, not detract from, the views from St James' Park".

Mr Corner added that "...if the Doon Street proposal is constructed, there cannot be any reasonable objection to no 1 Blackfriars Road. As all the images show, no 1 will be almost entirely concealed by Doon Street".

Southwark Council also rejected WCDG's criticism of the off-site provision of social rented housing, and explained that a site has been identified off New Kent Road.

Mr Corner concluded by explaining that "each of these schemes is a masterwork by one of this country's leading architects".

Christopher Katkowski QC, representing the developers of 20 Blackfriars Road, explained that his clients' proposals "would continue the renaissance of northern Southwark close to the South Bank of the Thames in a hugely positive manner".

Mr Katkowski described the buildings currently on the site as being of "distinctly limited merit". "Christ Church Garden next door is hardly a place to linger," he said.

"This unprepossessing area is crying out for the high-quality design initiatives that are sought by ... policy, not least so as to lift the spirits of the many thousands of people who walk by and through the site every day".

The buildings designed by Jim Eyre of Wilkinson Eyre would be "bespoke buildings of their time and uniquely of their place" whose "facetted designs express conceptual ideas of buildings mediating between the earth and the sky..."

Mr Katkowski highighted the improvements to the public realm, with a new square enclosed by shops and cafes whose "flow of vegetation" would bring "calm and relief from the heavily trafficked environment beyond".

The inquiry heard that the proposals have "dramatic potential to energise the area as a confident quarter of the world city".

Addressing the matters raised by the city council and Royal Parks, Mr Katkowski insisted that "there is no cogent case against the proposals for 20 Blackfriars Road based on their effect on views in or near St James's Park, on their own or with 1 Blackfriars Road, with Doon Street or not".

He told the inquiry that "the points raised by the new Mayor are not supported by any real analysis and ignore the clear and contrary evidence that has been placed before the inquiry".

Russell Harris QC, representing the developers of the Mirax-Beetham Tower at 1 Blackfriars Road, began his closing submission with a description of a walk he had taken along the north bank of the Thames looking across to the southern bank. "North Southwark really didn't look like a place at the heart of a world city," he said.

His client's tower would be "a thoroughly positive and welcome addition to the townscape". He explained that the "monumental horizontality" of bridges such as Blackfriars "calls for a vertical counterpoint" which "reaches for the sky with subtlety and simplicity".

Mr Harris told the inquiry that the best views of the "new quarter" at Blackfriars would be from the Millennium Bridge where the pedestrian would be able to enjoy the "exciting dialogue" between the proposed Shard at London Bridge and the tower at 1 Blackfriars Road with the Tate Modern chimney at the centre of the composition.