New police base next to Waterloo Station

The British Transport Police has opened a new police station in Holmes Terrace next to Waterloo Station. 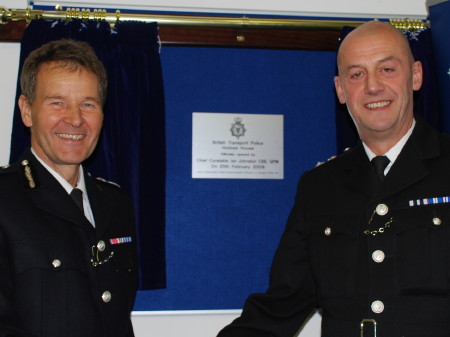 Holmes House has been refurbished and transformed into a central policing base for frontline officers and detectives attached to the London South Area of the BTP.

"The London South Area is without a doubt one of our busiest policing areas which achieves some excellent results in terms of detecting and deterring crime on the railways," says Chief Constable Ian Johnston who opened the new station.

"I am pleased to open this new police station, which will be a base for officers to continue to build upon their extraordinary work on protecting and serving passengers and staff as well as working closely with the industry to make the network as safe as possible."

"Over the years, through growth and investment, our policing family has grown to include not just frontline constables and detectives, but also increasing numbers of community support officers, special constables and support staff.

"Finding a location in central London is always a challenge, and we were fortunate to be able to invest in this opportunity and bring together our various teams at Holmes House. I'm certain that with this new station we can continue to build upon the good results achieved by officers on the area in reducing crime and increasing the number of offenders prosecuted."

Holmes House is tucked away behind The Fire Station bar just off Waterloo Road.