Last week the Arc Community Trustees officially took over the running of the Arc Nursery from Charterhouse-in Southwark. 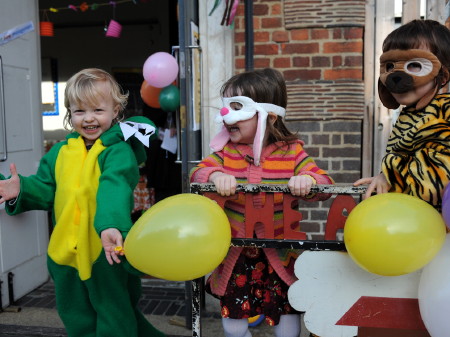 Since last November local parents have been preparing a rescue plan for the nursery which at one point seemed to be just weeks away from closure.

Despite a strong reputation the future of the Arc Nursery, which opened in 2002, was cast into doubt when historic local charity Charterhouse-in-Southwark decided to stop providing services directly and become a grant-giving body instead.

Children arriving at the Arc last Wednesday – the first day of the new regime – were greeted with balloons and bunting and were given animal masks to play with.

Arc Community Trustees (ACT) is chaired by local architect Andrew Wright. The trustees want to expand the number of families getting financial assistance – believing that low income should not be a barrier to getting quality childcare, and aim to raise funds to give some help directly.

The ACT rescue plan has brought some much-needed certainty to the nursery: enquiries from parents are on the increase and the waiting list has already begun to grow.

The nursery has space for 47 children and employs 14 staff.