Calls for rethink of Charterhouse-in-Southwark sell-off

Opposition is growing to the plans by local charity Charterhouse-in-Southwark to sell its buildings and become a funder rather than a provider of local services. 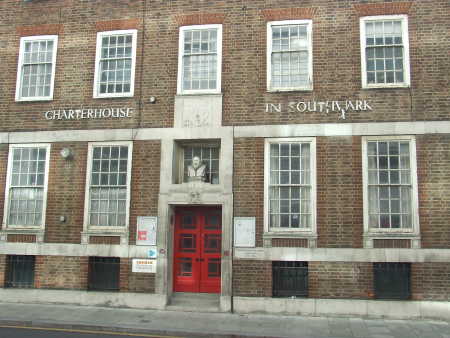 Juliet Smith, a nearby resident for over forty years and user of Charterhouse services, on Wednesday night led a deputation to a packed meeting of the Borough & Bankside Community Council.

Earlier this week she joined a group of residents who presented a petition to the Charterhouse-in-Southwark chair Armel Cates and director Janet Kennedy as they arrived for a trustees meeting.

In February the trustees announced that Charterhouse will raise income by disposing of the Rainbow Building in Crosby Row which includes St Hugh's Church, the Arc nursery at 39 Crosby Row and 40 Tabard Street known for its prominent bust of founder Thomas Sutton above the door. Services are to be outsourced to Training for Life and Downside Fisher Youth Club in Druid Street.

Juliet Smith, who was accompanied by both users and staff, told the Community Council that she was dismayed at the news that after over a hundred years of supporting the community in Southwark, and facilitating and nurturing its aspirations, Charterhouse-in-Southwark gave just six weeks notice of terminating all directly delivered services.

"It is the most vulnerable residents in Southwark who will be losing a valuable and irreplaceable resource" she said.

"It is astonishing that Charterhouse appears to have completely ignored every report that has looked into the future of Charterhouse with recommendations of how to make the best use of resources available, including the 82 page Prevista Feasibility Study, completed in July 2005. This report was never printed or circulated to the community or indeed staff who largely seem unaware of its existence.

"The Prevista report cost £20,000 and was funded by the Neighbourhood Renewal Fund. The community has a right to know what informed the decision of the Charterhouse trustees to ignore all the reports commissioned and to finally close its doors."

Juliet Smith also raised the possibility of public money given to refurbish the Arc nursery and other improvements having to be repaid in the event of a sale of buildings.

Present at the meeting was Simon Hughes MP who has written to the trustees to tell them that "it is not too late to listen and work together as a community".

"I am really unhappy with how staff have been treated," he says. "This is the issue which everyone has found most upsetting. I am told that staff with many years of service were given no thanks or acknowledgment for all the work they had done and no support or advice about finding new employment.

"I am surprised that there was no farewell occasion for those who had given so much. I am also told that no senior management were around during the last week. This is a terrible way for any employer, let alone a charity, to treat people."

Meanwhile an online petition has been started by Downside Fisher users opposed to the planned amalgamation with Charterhouse youth services on the grounds that they will lose their identity. This year is the Downside Fisher Youth Club's centenary having been founded in 1908 as the Downside Settlement by former pupils of Downside Abbey's school.

Charterhouse-in-Southwark was established in 1885 by old boys of Charterhouse, the former City school now in Surrey.

Charterhouse-in-Southwark director Janet Kennedy said that any petition will be looked at by the trustees but claimed that the charity "is still open for business". Responding to concerns about the future of the Arc nursery, she said that 39 Crosby Row was on the market as a going concern with the aim of protecting both jobs and child places.

The the trustees have said that St Hugh's church in the Rainbow building "will not be affected by the changes in the short term".