Cyclists at the Elephant & Castle had the opportunity to sit inside a truck's cab to see the limited visibility available to the driver on the nearside of the vehicle. 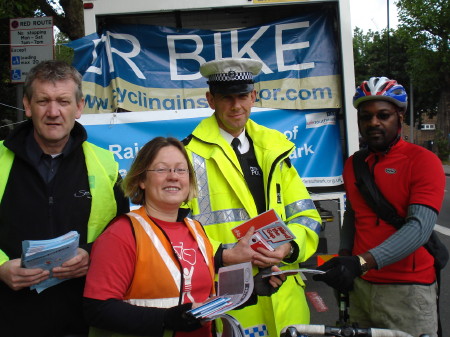 The 'Exchanging Places' initiative is a partnership between Southwark Council, the Metropolitan Police, Southwark Cyclists and Veolia Environmental Services.

Officers were stopping and speaking to lorry drivers to raise awareness of collisions and distributing special fresnel lenses to lorry drivers who do not have forward facing and side facing mirrors. These mirrors stick to the driver's nearside window and allow greater visibility.

Last year 15 cyclists died on London's roads. Nine of those were in collision with a lorry and on the nearside of the vehicle, and this year five cyclists have died, three of whom were in the same situation.

Last month Meryam Ozekman was killed at the Elephant & Castle.

"The toll of death from this sort of collision must be stopped," says Inspector Graham Horwood.

"The Met is working with its partners to raise awareness of the dangers for both cyclists and HGV drivers. I would urge cyclists to attend one of the sites during this operation and learn why these collisions occur and how they can be avoided – it could save your life."

Southwark Council road safety office Gareth Tuffery added: "This is our fourth event of this kind, and although we're making great progress in educating both cyclists and drivers, it's still vital that we promote responsible road use among as many people as possible."