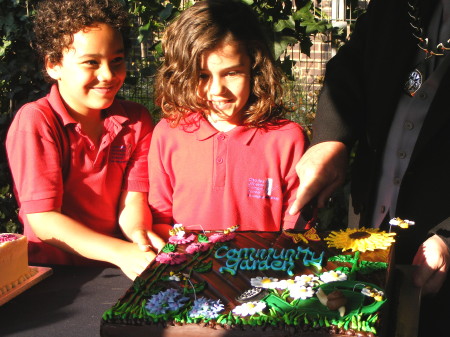 The community garden occupies a small sliver of land to east of the former Bankside Power Station.

"A bit of fresh air and to hear the birds singing really is what these places are all about," said Chris Baines. "Having it manned by the community and looking as wonderful as this will be an encouragement to many many people.

"We are beginning to learn how important these place are to the birds, butterflies and the wildlife.

"You are very lucky because of where you are. The swifts that nest in my street (in Wolverhampton) fly through Southwark. This is the main route for the migatory birds of Britain.

"The moths that will be flying around the flowers here will have flown from North Africa to feed on the nectar here. Because of where you are by the river you are one of those critical stepping stones.

"This is not just about being involved in the garden it is one more little bit of a mosaic that is beinnning to rebuild the whole of the landscape."

Mr Baines is a patron of Bankside Open Spaces Trust which manages the garden in partnership with Tate.

Ward councillor Adele Morris described the open space – which was opened in 2007 – as a "fantastic, special secret garden for the residents".

Children were invited to cut the two birthday cakes made and decorated by Konditor & Cook.