A lost plaque has been unveiled by Lord Rothermere at Geraldine Mary Harmsworth Park to celebrate the 75th anniversary. 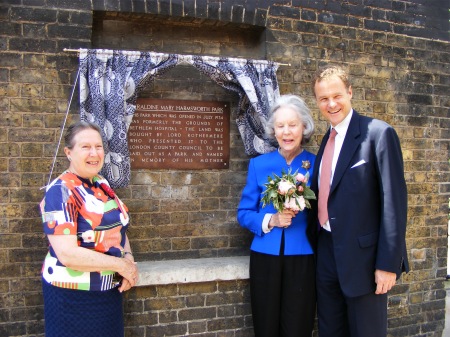 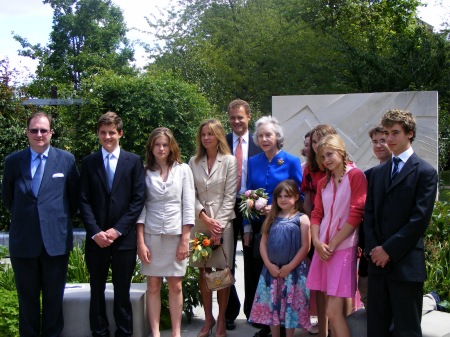 Lord Rothermere with his family in the Peace Garden 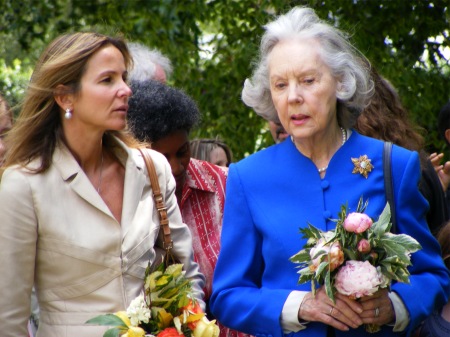 Lady Cromer (right), who attended the park opening in 1934, with Lady Rothermere

The plaque, found in the lodge and now in the St George's Road wall, records the gift of the 14 acre parkland to "the splendid struggling mothers of Southwark" by the first Viscount Rothermere.

"My great-grandfather gave the park in memory of his mother. She was a lady who firmly believed in helping children and young mothers," Lord Rothermere told guests gathered in a tent.

"Geraldine came from Dublin. It was not a wealthy family. She married my great-great- grandfather Alfred and had fourteen children. Alfred moved to London and became a barrister – sadly not a wealthy one. He died and she was left to bring up her children alone.

"She did a good job – two became viscounts, one a baron and three were MPs. All of them adored her.

"She never forgot her roots or how difficult it was to bring up children as a single mother. She was and is the matriarch of the family."

Assisting Lord Rothermere to pull back the curtains covering the plaque was his aunt the Dowager Lady Cromer who as a child was present at the park's opening in 1934.

An exhibition in the new pavilion included a photograph of the newly elected London County Council leader Herbert Morrison at the opening with the first Lord Rothermere who had bought the site in 1926 to give the former hospital building to the Imperial War Museum.

The present Lord Rothermere, who has agreed to chair the Imperial War Museum Foundation set up to raise funds for its redevelopment, was accompanied by his wife Claudia and children Vere, aged 14, and Ellie, 12, as well as other relatives.

"It's impressive how well it is kept" commented Lady Rothermere in the Peace Garden. She added that she hoped to bring her younger children to see the park. The couple's five year old daughter has the name Geraldine.

This year is the tenth anniversary of the unveiling of the Soviet War Memorial, commemorating the loss of 27 million citizens of the former Soviet Union during the Second World War, and the opening of the Tibetan Peace Garden by the Dalai Lama.