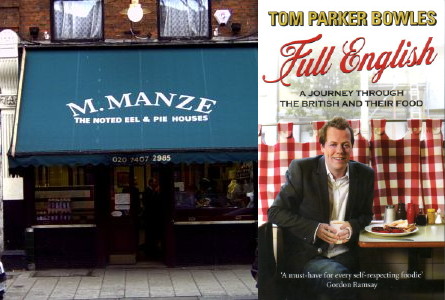 The food writer, who claims pie and mash as "one of England's defining dishes along with fish and chips", looks at the history of the Bermondsey shop which he describes as being a 'magnificent room" with "an imposing and attractive shopfront".

"As I stood outside M Manze in Bermondsey, the oldest operating pie and mash shop in England, I felt I was about to enter a lost world of London life," he said recently.

In 1878 Michele Manze walked from Ravello to Naples to sail to England. Having met Robert Cooke he married his daughter Ada and together they opened the shop in Tower Bridge Road in 1892. Robert Cooke's own pie and mash shop in The Cut only closed in 2002.

"The seating is communal, in wooden pews, stretching down the left and overflowing at the back," writes the author describing his visit to Manze's. "The diners sit hunched over their pies and eels, as if in prayer."

But he admits to being baffled when first ordering pie and mash and being asked: "One and one or two and two?" He discovers that the answer 'Two and two' gets him two pies and two scoops of mash. The "infamous liquor" he describes as "gloppy, green, viscous stuff".

Tom Parker Bowles, a presenter of UKTV Food's Market Kitchen which is partly filmed in Borough Market, also tried Manze's eels and in the book offers his own recipe for eel pie based on a 500 year old one from Richmond.