Charles Dickens Primary School in Lant Street now carries two blue plaques; one for the author who gave the school its name and one for alumnus Harry Cole. 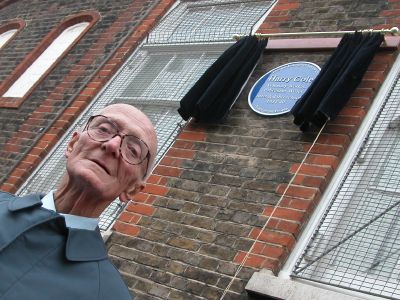 Harry Cole at the unveiling ceremony

Harry Cole, who worked at the Carter Street Police Station in Walworth Road, came to prominence in the 1980s after writing a series of books on his experiences as a PC.

The plaque is displayed at Charles Dickens Primary School, where Harry was a pupil from 1934 to 1940. Its unveiling this week has prompted pupils to research the school's history and discover what life was like at the school when Harry was a student.

"I was totally stunned and delighted when I heard the news," says Harry.

"Everything I've ever done has been in this borough, including thirty years as a copper at Walworth police station. When I got the call I said to my wife 'they must have made a mistake – I'm the most boring fella in South London'!'

Southwark Council's Blue Plaque scheme was set up to recognise the borough's famous sons and daughters. Unlike other plaque schemes, famous places and events can also be acknowledged and members of the public are invited to vote.

"We're delighted to give this award to Harry – he lived, worked and rose to fame in this borough, and has spent much of his life giving back to the community around him." says Cllr Lorraine Zuleta, executive member for culture, leisure and sport.This plaque is the people's tribute to him, and voters were in agreement that he is a very deserving candidate."

A blue plaque at the school celebrating Charles Dickens' connections with Southwark was unveiled by Simon Callow in 2003.