The founder of the National Trust and the historic Tower Bridge Road pie and mash shop are to be recognised with Southwark blue plaques. 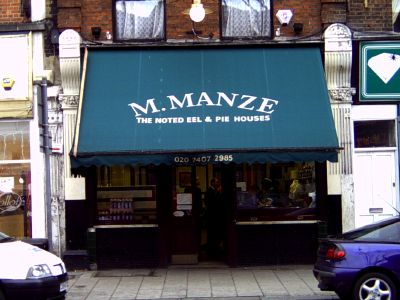 The Southwark Blue Plaque scheme – which allows members of the public to nominate people and places they think deserve recognition – is in its fourth year.

Born in 1838, trail blazer Octavia Hill was just 26 years-old when she began to find better housing for Southwark's poverty-stricken residents, later establishing the National Trust in 1895. Southwark Council has not yet revealed where the plaque will be installed.

Although the shopfront arguably speaks for itself the original Manze's Pie and Mash Shop on Tower Bridge Road has also scooped a plaque to join its sister shop in Peckham which received a plaque in 2005.

Octavia Hill and Manze's are joined on the winners list by local author Harry Cole who came to prominence with his memoirs detailing his time as a bobby on the beat in Walworth.

"We're delighted to pay tribute to Octavia Hill, a remarkable woman whose legacy can be seen in the homes that still stand in Southwark today and in the much loved and valued institution of the National Trust," says Cllr Lorraine Zuleta, executive member for culture, leisure and sport.

"Our bestselling author and former bobby on the beat Harry Cole is also an extremely deserving candidate – and where would we be without the famous Manze's Pie and Mash shop.

"Southwark's blue plaques are unique because they reflect opinion out on the street – the fact that so many people have once again cast a vote shows just how important it is to honour the people and places that contribute to the borough's rich history."

Earlier this year the Princess Royal officially reopened the restored Red Cross Garden in Redcross Way. The garden was laid out by Octavia Hill in 1888 on the site of a derelict paper factory for the use and enjoyment of the deprived people of Southwark.

The National Trust's Ian Wilson says: "Octavia was a radical thinker and more importantly a doer! Her belief in the need to better the lives of those less advantaged is an enduring principle that still inspires many thousands of people today. The project at the Red Cross Cottages is an excellent example of how she worked, sometimes on a very small scale, to make a real difference to people's lives. At a time when issues of housing quality and access to green space are once again at the forefront of our minds it could not be a more appropriate time to honour her achievement and highlight the issues she cared about."

In 1878 three-year-old Michele Manze arrived in Britain from a picturesque hillside village called Ravello in southern Italy. The Manze family settled in Bermondsey and began trading as ice-merchants, turning later to ice-cream makers.

Realising the need for more substantial food in Edwardian London, Michele branched into the pie, mash and eel trade and the first shop to bear his name opened in 1902 at 87 Tower Bridge Road. By 1930 there were a total of 14 pie, mash and eel shops in London bearing the Manze name. Michele Manze died in 1932 and his son Lionel took over the running of the shops in Tower Bridge Road and Peckham High Street.