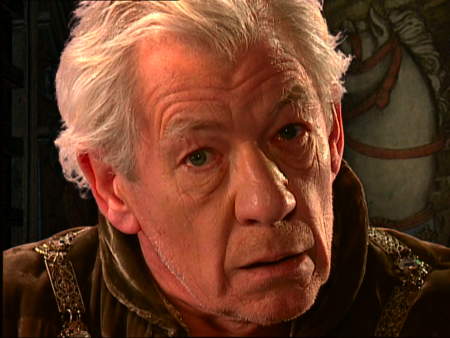 The remains of the 1587 playhouse were found in an excavation two decades ago and the charity that safeguards the site is now raising funds to return the Rose Theatre site to its rightful status at the heart of Bankside's cultural life.

The film has been devised by local resident Robert Pennant Jones and is intended to give visitors an idea of how his plays might have been seen and heard by audiences in the place they were first performed.

The extracts have all been shot against a green screen which will enable the performances to be used in future plans to project the actors into the space where the Rose's stage would have stood.

In this initial presentation the actors appear in front of a virtual representation of the original playhouse.

"The remains of the Rose Theatre were discovered here in excavations which started in late 1988," explains archaeologist Harvey Sheldon. "They were only intended to last three weeks.

"When, by the end of December 1988, it was clear that some of the remains of the first Elizabethan theatre on Bankside were actually here, we had to mount a huge campaign to ensure that excavations could continue.

"In that we were greatly helped by the theatrical profession and the world of arts and literature generally. Without that I'm sure we wouldn't have had the media interest and political support that allowed the Rose to survive."

The Rose Theatre Trust was set up to protect the remains of the playhouse and to find a way of continuing the performance tradition on the theatre site.

Ten years ago a permanent exhibition was created and the space has been used sporadically for public performances.

The trust is now seeking Lottery funding to excavate the remaining portion of the site and to recreate the playhouse in sight and sound.

There is also a plan to create more a more permanent performance space, perhaps on a platform that could be lowered into position above the archaeological remains.

• The Genius of Christopher Marlowe is showing nightly at the Rose Theatre Exhibition in Park Street until Saturday 29 August; tickets Ł4.50 (under-14s free) from 020 7261 9565 or [email protected]

• A production of Othello is also showing at the Rose till 29 August.