Office block above Rose Theatre for sale at £98 million

An office block occupied by the Crown Prosecution Service and the Health & Safety Executive has been put up for sale by its Singaporean owners. 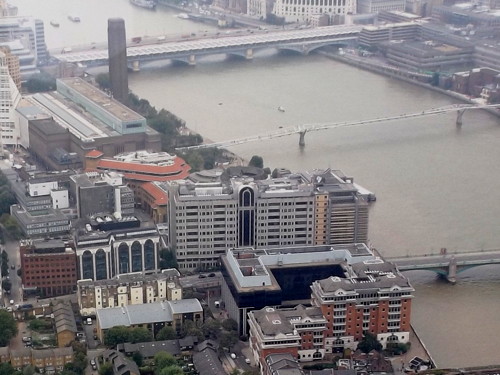 Rose Court seen from the Shard

Now the firm has instructed Savills to find a buyer for the early 1990s block, with an asking price of at least £98 million.

The Government's lease on the building – occupied by the Crown Prosecution Service and the Health & Safety Executive – runs until 2018.

Ed Nicholson, associate director in the Central London Investment team at Savills, said that "the option to fully refurbish or redevelop the offices at the expiry of the current lease could include the addition of two floors for office or residential use, subject to planning".

He added: "We therefore anticipate a wealth of interest from a wide variety of buyers."

The site came to national and international attention in 1989 when the remains of the Rose Theatre – the original Elizabethan playhouse on Bankside – were discovered.

Leading actors and celebrities joined the 'Save the Rose' campaign which successfully delayed building work to ensure that the archaeological remains were protected when the office block was constructed.

In 1989 actor Timothy Dalton said that the construction of the office block on such a significant site would serve as "a monument to philistinism".

The Rose Theatre Trust now runs the archaeological site in the basement of Rose Court – which is a scheduled monument – as The Rose Playhouse with a regular programme of performances.