The £50 million National Theatre masterplan has been subject to its first public consultation in Waterloo. 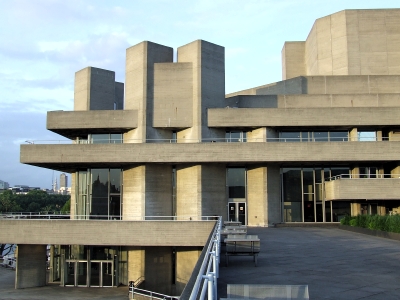 Initial plans were shown to a meeting of the Waterloo Community Development Group on Wednesday by Paddy Dillon from architects Haworth Tompkins.

Haworth Tompkins' recent local projects include the National Theatre Studio in The Cut, the Young Vic and the Coin Street Neighbourhood Centre.

Earlier NT manager John Langley had produced an aerial picture of the site taken in 1975 when there was no continuous riverside walkway outside the newly completed theatre. He pointed to the Thames lapping at the neighbouring IBM building.

"Everything that goes on stage is made in that building," said Mr Langley turning to the NT. He added that only a quarter of the interior was seen by the public.

Paddy Dillon said that half the people love the building and the other hate it.

"When it was designed the architects thought of it as a very democratic building. Compared to theatres of the time it was very modern. There was a terrific idealism about the NT being the theatre of the people."

The plans include opening up the north side so that passers-by can see into the theatre and people inside can look out.

This would involve moving the bookshop, which is not in its original position, to the cloakroom area and relocating the refuse bin area with its extractor fans away from the riverside.

Changes allow for entry to the small Cottesloe Theatre on the east to be possible from within the main building for the first time. A dedicated education centre would be created alongside.

The at present unseen scenery studio will be moved into a new building on the south side narrowing the entrance to Cottesloe Avenue. Large windows would allow the public to watch work in progress.

The consultation with Waterloo residents was a widening of an ongoing dialogue which has started with Lambeth Council planners, English Heritage and the Twentieth Century Society.

Paddy Dillon will be returning to WCDG with final proposals next year. The planning application is due to be made next summer with work starting in 2011.

Fundraising will begin shortly but it is hoped that £10 million for vital engineering works might be made available by the government.

The plans were received with interest and even some enthusiasm at the meeting. There was a general acceptance that the building needed to change as, according to one local resident, its architect Denys Lasdun had predicted thirty years ago.

However, several questions were raised about the proximity of the proposed addition in Upper Ground to the already approved Doon Street tower block opposite. Paddy Dillon confirmed that the NT was requesting details of wind and shadow projections.