Southwark Council has been urged to release further details of its arrangements with Lend Lease Europe for the transformation of the Elephant & Castle. 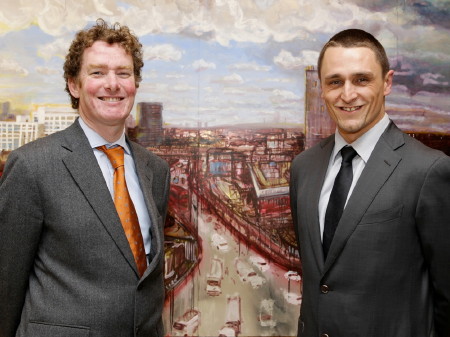 Southwark leader Cllr Nick Stanton and Lend Lease Europe chief executive Dan Labbad in front of a new painting by Elephant & Castle artist Reuben Powell at the council's Tooley Street offices
Updated 2 December: A Lend Lease spokesperson said: "Lend Lease is committed to developing all six phases of the Elephant and Castle regeneration. As such we will be responsible for the funding of the project."

The council's executive approved a heads of terms agreement with Lend Lease Europe on Monday night, but opposition councillors say that not enough is yet known about the financial terms of the deal.

The main element of the deal is the sale by the council of the land currently occupied by the Heygate Estate. The authority has said that it intends to grant two 999-year leases on the land.

Southwark Council leader Nick Stanton insists that the deal represents value for money despite the impact of the recession on the viability of all types of development. But not everybody is convinced.

"Cllr Stanton says that this is a good deal for Southwark's taxpayers, but when the developer says its own investment will be small and the council refuses to release any details of the finances, how are residents supposed to be confident about it?" asks Cllr Peter John, leader of Southwark's Labour group.

"The community has been left out of this deal for too long; it's just not acceptable for local people to be left in the dark about what is happening to their area and their homes. I'm deeply concerned that it will now be the Lend Lease shareholders and not local residents and businesses which benefit most from the regeneration.

"There are only a couple of details we can be certain of, and they're all bad. The community in Elephant & Castle was originally promised new leisure facilities and the demolition of the shopping centre as part of the regeneration, but these plans have been indefinitely shelved. It would be simply unacceptable for Lend Lease to put little into the regeneration and walk away with a fat pay cheque at the end of the day."

North Southwark and Bermondsey's Lib Dem MP Simon Hughes welcomed the news that the council was proceeding with the Lend lease deal. He added: "I will continue to do all that I can to ensure that local residents get maximum benefits from regeneration at the Elephant & Castle."

Backbench councillors from all parties are likely to have an opportunity to probe the arrangements set out in the heads of terms agreement at a meeting of Southwark's overview and scrutiny committee next Monday night.