About 15 people gathered in Mandela Way on Saturday morning to protest against Westminster City Council's plans to park part of its fleet of dustcarts in Bermondsey. 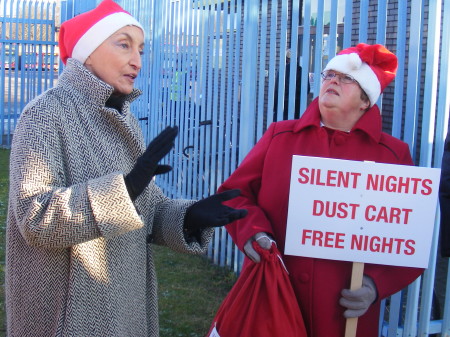 Jean McCorry (right) led the protest against the depot 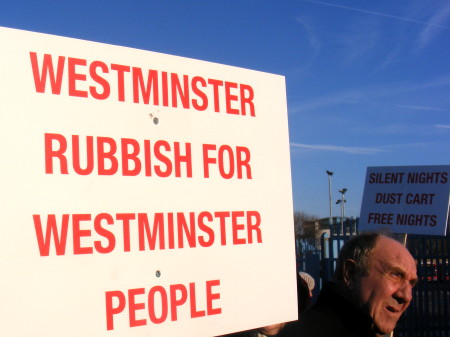 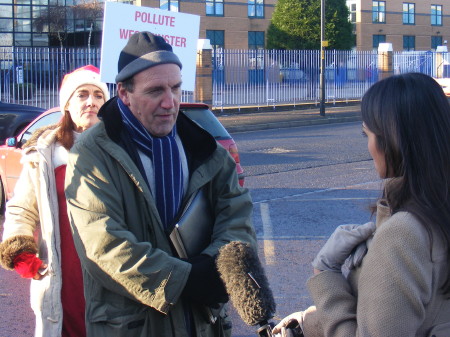 Campaigners led by local resident Jean McCorry claim that the council failed to send consultation letters about the planning application to some of the homes closest to the proposed development.

The protesters held placards with slogans including "Westminster rubbish for Westminster people" and "Pollute Westminster not Bermondsey".

Mrs McCorry had organised a petition against the depot with more than 1,000 signatures which was sent to the planning department before the application was considered.

Westminster City Council owns the open-air bus garage to the west of the Parliamentary Press building and wants to build a new covered depot to accommodate 50 dustcarts and 20 other street cleaning vehicles.

The dustcarts already drive up and down Old Kent Road when travelling between Westminster and the SELCHP plant in Lewisham, so Mandela Way fits the council's operational needs very well.

The vehicles would be emptied and cleaned at SELCHP before coming to Mandela Way and no waste would be stored or processed at the Bermondsey site.

The campaigners fear that the dustcarts will be noisier and smellier than the buses which are currently based at the depot. They also object to Westminster carrying out refuse-related activities outside their own boundaries.

Councillors Ade Lasaki and Linda Manchester joined the protest and held placards in support of the campaign against the depot.

However their Lib Dem colleague Simon Hughes MP visited the event to try to allay people's fears about the likely impact of the depot.

The MP said that he didn't support the depot but felt that some of the claims made about its effects had been overstated.

He also said that he understands that Mandela Way is considered a reserve site by Westminster City Council and the depot for refuse vehicles may never be built.

Jean McCorry and her campaigners have pledged to keep up the pressure on Westminster City Council in the new year.