Father Christmas dropped in at the Evelina Childrenâ€™s Hospital in Lambeth Palace Road on Tuesday riding a Harley Davidson. 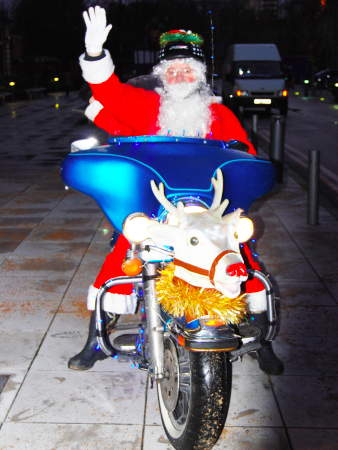 Staff from Thales, a leading international electronics and systems group, visited the Evelina Children's Hospital to donate sack-loads of presents to sick children. They also donated more than Ł1000 in cash and a cheque for Ł2,600 to the hospital, as well as two Wiis and cakes and mince pies to hardworking staff.

Project manager Paul Mansell came dressed as Father Christmas on a Harley Davidson, along with his helper, Jacqueline Stoddart, procurement manager. Other staff, including Matt Brassington dressed as elves or superheroes, arriving on a bright flashing Range Rover filled with presents. They were accompanied by a magician and entertainers to help put a smile on the children's faces.

"Six years ago my son Oliver was born and I was immediately sent out to Iraq with the Army," said Matt Brassington.

"Not long afterwards, Oliver was taken into hospital quite seriously ill in Germany. I was thousands of miles away and my partner was scared and could not speak German. The hospital nursed my son back to health and comforted my partner and reassured her.

"The kindness and support they gave my family in my absence has never been forgotten and hence I wanted to give something back."

"The Evelina Children's Hospital is a very similar hospital to the one Oliver was treated at. I put the idea of donating presents to the children there to my friends and colleagues and the feedback was overwhelming.

"We are here today because people have kind hearts and believe in the spirit of Christmas. We cannot make the children better, but I hope we can make them laugh and smile and then we have achieved what we set out to do."

Hugo Middlemas, director of fundraising for Guy's and St Thomas' Charity and Guy's and St Thomas' NHS Foundation Trust, said: "We are thrilled that children at the Evelina have been given so many extra gifts from Thales this Christmas. Staff at Thales have been extremely generous and we are incredibly grateful to them.

"If you too want to help make the wishes of children at the Evelina come true, please visit the Charity's website at www.gsttcharity.org.uk/wishes, where you can donate this Christmas."