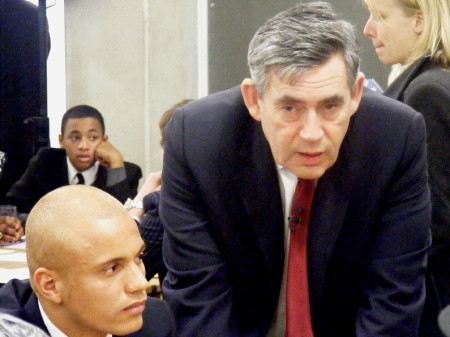 Gordon Brown on a previous visit to SE1

The Prime Minister urged people to check on their neighbours during the current cold weather and make sure that elderly and vulnerable people have the support and supplies they need if they are unable to venture out.

"Icy roads and pavements are making many older people prisoners in their homesâ€š frightened to venture out through fear of falling and leaving them feeling isolated and lonely," explains Andrew Harropâ€š head of policy at Age Concern and Help the Aged.

"With older people being one of the groups most at risk during this cold snapâ€š we are delighted ministers made the time to call in on a group of pensioners in south London.

The Prime Minister made reference to his visit to SE1 in a podcast released on Saturday.

"I was pleased to have the chance to talk to some of our elderly citizens in Southwark, in south London, to find out how they're coping with the coldest weather of the winter so far," said the Prime Minister.

"It's extraordinary to think that in some parts of the country it's been almost as cold as in the South Pole.

"These are exceptional conditions. And I understand that for many of you this is a very serious, worrying and frustrating time."

On Monday morning Conservative Party leader David Cameron MP will make a speech on 'Building the Responsible Society: The importance of parenting and early years support' at the headquarters of think tank Demos in Tooley Street.