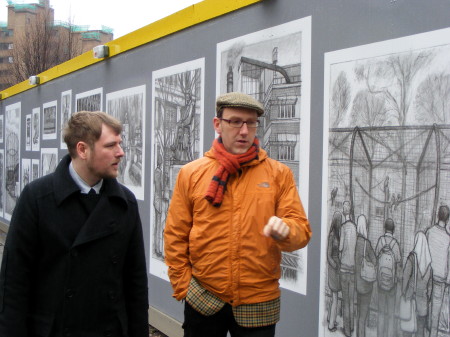 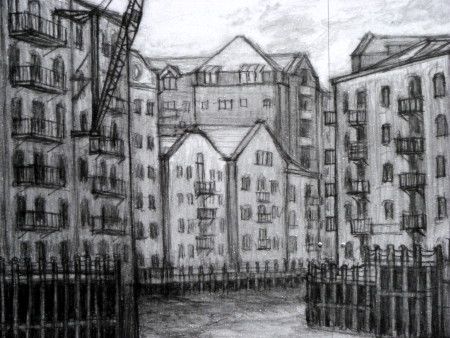 Pencil drawings by Swedish artist Martin Karlsson have been enlarged to decorate the new perimiter fence to the south west of Tate Modern. The hoarding replaces the double hedge which has been uprooted to allow work to begin on the gallery's extension.

The 123 drawings, inspired by Gustav Doré, were produced over two years.

"I played a game called Chill, mainly set in Victorian London, in an atmosphere of Sherlock Holmes, Jack the Ripper and Gothic mysteries," says Martin Karlsson recalling his chilhood.

"I remember images by the French 19th-century artist Gustave Doré illustrating the game. They made a lasting impression."

He has visited places known to Doré including Borough Market and Shad Thames. There area also pictures of St Saviour's Dock and St Mary Overie Dock.

Doré drew Billingsgate Market opposite Hay's Galleria but Karlsson has had to go to Docklands to find today's fish market.

More London Place is featured as the successor to Pickle Herring Street which once ran parallel to the Thames in front of today's City Hall.

The outdoor exhibition, which is expected to remain in place until 2012, was opened on Monday in pouring rain.

The exhibition complements the Unofficial Deposited Records exhibition which has been in place for more than four years on the hoardings to the south east of Tate Modern.